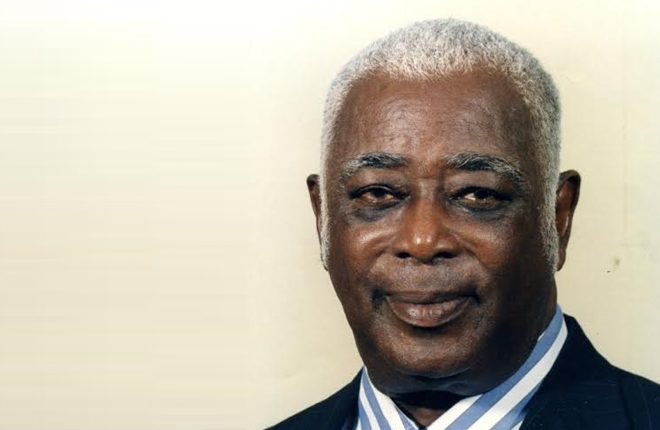 (SKNIS): Sir Cuthbert Montraville Sebastian, GCMG, OBE, MD, ED, KSTJ, Former Governor-General of the Federation of St. Kitts and Nevis from 1996 to 2013, will be accorded a state funeral with full military honours on Monday 10th April, 2017, at the St. George’s Anglican Church on Cayon Street, Basseterre, at 1:30 pm. Interment will be at the Springfield Cemetery.

Monday 10th April has been declared a national day of mourning by the government and a national half-holiday for the public and private sectors has been proclaimed by the Governor-General His Excellency Sir Tapley Seaton to honour the life and contribution to the nation of the late Sir Cuthbert Sebastian (1921-2017).

The body of Sir Cuthbert will lie in state at Government House from 8:30am to 12:00 pm on 10th April for public viewing and all flags on government buildings will be flown at half-staff on the same day.

Sir Cuthbert died on 25th March, 2017. He was 95. He has served in St. Kitts, Nevis and Anguilla in a number of capacities including pupil teacher, learner/dispenser, chemist and druggist, laboratory technician, senior dispenser, medical superintendent and obstetrician–gynaecologist. He was Chief Medical Officer of St. Kitts and Nevis from 1980 to 1983. From 1962 to 1966, he pursued training at the Dundee Royal Infirmary, Scotland, in obstetrics and gynaecology.