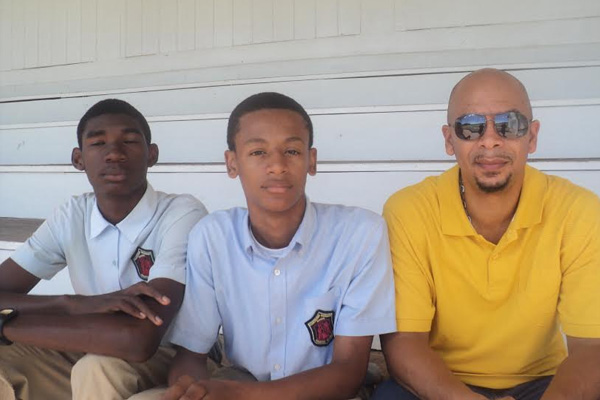 Mentored and supported by Xavia dad, Patrick Howell and a cast comprised of adults and children, the two students have used the films to pass messages that will make youth stay out of trouble. They too want to stay out of trouble by occupying themselves gainfully, “We want to make movies to keep out of trouble and to do what we love to do best,” Xavia said.

The first movie was the brainchild of Xavia Howell and Husani Hamm, both students of Charlestown Secondary School. The movie was shot, edited and produced using a school issued laptop. It was shot in the Morningstar area and is a comedy that depicts two idiot thieves and espouses that “crime does not pay”.

The second movie “The Cookies 2014”, was created by DaddyPlay, who is a fixture on the local music scene and also father to Xavia. In this movie, a father , played by DaddyPlay, teaches life lessons to his daughter, played by Eden Howell, his real life daughter.

Both films were released on Youtube via links on DaddyPlay Howell’s Facebook page. The Likes and comments have been overwhelmingly positive and the views on Youtube were rapid, especially for “The Cookies” which garnered over a 1000 views in 4 days and got a combined 100 plus likes and comments on Facebook.

The team involved in producing the films is busy putting together the extended directors cut of the cookies, packed with extra scenes and more cameos with DJ Woodis and more, plus bloopers, due to be released shortly.

Both movies are funny but still teach life lessons to the youths. Parents have raved about the positive messages in both movies. Believe it or not both films come in under 15 minutes each, short and sweet.

Well wishers and sponsors can come in handy. Howell(Sr.) is optimistic that with additional hardware and equipment such as a camera with high definition and a strong lap top, the students will produce other films and commercials. “They found something to do that they are happy about,” Howell said. He added that he teamed up with the students to produce an unofficial commercial for the Hanley Group on Tarrus Riley. ‘Mervin Hanley liked it,” Howell explained.

DaddyPlay representing DaddyPlay Productions, and Xavia and Husani representing the Morning Star Group, plan to continue doing positive but entertaining movies in the near future.