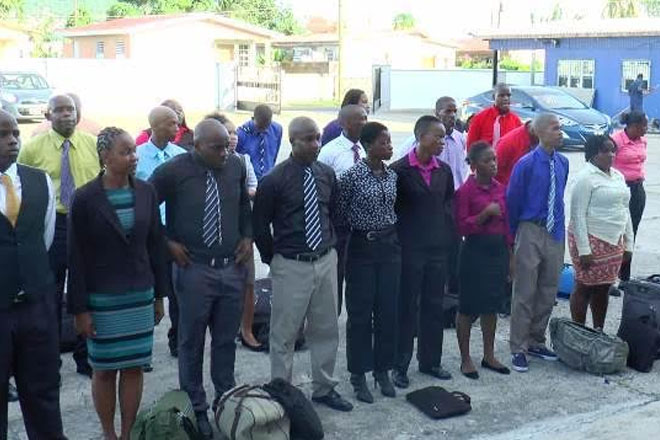 (ZIZ News) – On Sunday, 32 recruits reported to the Police Training School for training Class ’40’ of the Royal St. Christopher and Nevis Police Force.

With bags in hand, the young men and women showed up neatly dressed and ready to learn, first hand, about the Federation’s top security organisation.

Deputy Commander of the Police Training Centre, Inspector Eldrin Dickenson, is quoted in a release from the Force’s Public Information Director, Grell Browne as saying, “Day one, or ‘reporting-day’, was a relatively uneventful day for the recruits.”

He said, “Once the recruits arrived on the compound, they were given time to say goodbye to family and friends prior to 4.00 pm, then they entered the training centre barracks, their ‘new home’.”

ZIZ News understands that the intense training spans 26 weeks as it is expected to transform the trainees into professional police officers.

The training will include lectures and practical applications on general duties, criminal law, evidence and procedures, professional development and drills and physical training.

Other areas to be covered will include firearms training and traffic operations.

Station visits will also be conducted and an overview of the Regional Security System is also expected to be presented during the training.

According to Dickenson, Class ’40’ has 21 males and 11 females, who were all recruited locally, with two being from Nevis.” Among them are two ‘legacy’ recruits. Those are persons who are continuing a family tradition of service in the Royal St. Christopher and Nevis Police Force.