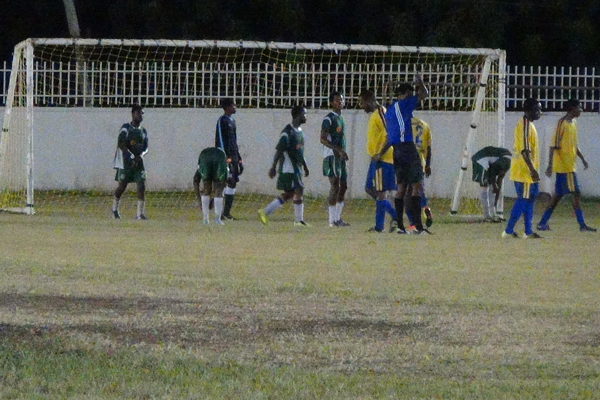 (Sports Page) A stunning left booter which whizzed to the left of a stranded goal keeper will be talked about for months to come. Of the 83 goals scored during the 2013 edition of the Legends’ cup, this must surely rank as the number one goal of the entire series.

What is even more amazing it was the grand finale of the series and Slybo Stoney Grove Strikers were behind the eight ball, with CCC Bath United leading with a score line of 1 goal to nil and perhaps relaxed in the ‘knowledge’ that they had secured the cup; and then it happened. A determined Captain of the Stoney Grove team, Sheldon DAPPER Newton, started a run through on the right flank and as the challenge increased, he made a belated pass to Deon SKETTIE Thompson who peeled off the astonishing left booter which went screaming into the back of the net.

It was in the 90th minute of the game. The game then went into four minutes of injury time with no change to the score line. The players came off for a brief respite but the Stoney Grove team knew then that they were back in the game.

The match then went in to overtime with 15 minutes per half and the first half produced some more intense play but no goals. Members of the sizeable crowd were predicting a penalty shoot out to determine the winner.

Then a foul, pretty close to the penaly area, caused FIFA referee Kimbell Ward to award a free key to the CCC Bath team which was superbly netted by the experienced Dale Farrell—make that 2-0 in favour of the Bath team and then shortly after, a defensive error by the Stoney Grove team, saw Keanu Thibou making a solo run through, with just the goal keeper to beat..That he did with deft touch to make it a lead of 3 goals to nil in favour of the Bath team. Soon after that, the screech of the Referee’s whistle sparked grand celebrations for the Bath team. They had indeed secured the legends’ cup 2013.

President of the Nevis Football Association, George BRIGO Meade indicated after the game that the presentation ceremony will be held in the not too distant future, at a date to be announced.

Statistics on the finals:

Results from the Semi-Finals of the Legends Cup 2013

The Legends’ Cup returned an astounding total of 83 goals in just 19 games of the competition.

These are the main contributors to this count: