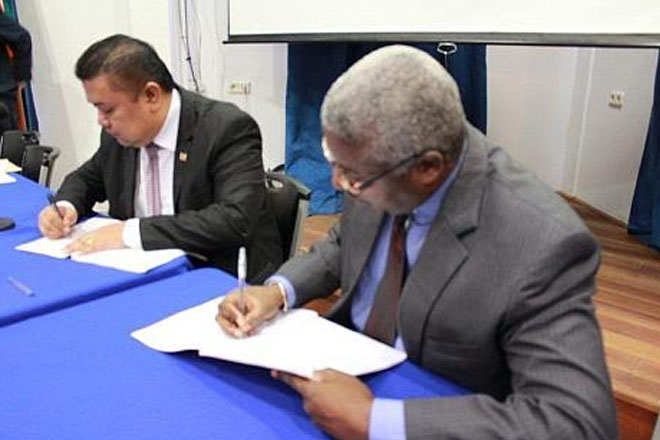 Paramaribo, Suriname — The Ministry of Trade and Industry on Friday signed two historic agreements with the Caribbean Development Bank for projects to improve Suriname’s implementation of both the CARICOM Single Market and Economy (CSME) and the European Partnership Agreement (EPA). The two projects will assist in transforming Suriname into a more competitive economy, increasing its export earnings, and making the country more attractive for investment.

The projects, to be implemented by the ministry and the Suriname Business Forum, are being funded through two grant facilities – The CSME Standby Facility and the EPA (Economic Partnership Agreement between the European Union and CARIFORUM) Standby Facility.

“With the support of the Caribbean Development Bank, CARIFORUM and the EU, we will be able to accomplish some important goals with these projects,” said minister of trade and industry, Don Soejit Tosendjojo. “These grants through the trade facilities will allow us to bridge the gap between world trends in trade facilitation and our current system, as well as prepare ourselves to deal with the increasing challenges of operating in competitive world markets. This project is an indication of the synergy between important development partners, namely the European Union, CARIFORUM, and the Caribbean Development Bank. It also symbolizes a new relationship between Suriname and the Caribbean Development Bank, one that will enable us to harvest many benefits in the future. I express my sincere appreciation to all institutions and individuals involved who have contributed to these projects and congratulate the business community of Suriname which will be the direct beneficiary of the important work being done here.”

The ministry will implement a grant from the EPA Standby Facility, which will help determine the requirements for establishing an electronic single window (ESW). The ESW will allow importers and exporters to submit all of the documentation needed to obtain licenses to trade online. Currently, applications for trade licenses must be submitted in hard copy and manually processed.

Depending on the volume of applications received and the extent to which forms have been filled correctly and accompanied by the required certificates, it can take up to a month to obtain a license. The establishment of an Electronic Single Window will allow all applications and processing to be done electronically thereby significantly reducing processing time to as little as 48 hours.

“These two projects, when fully implemented, will in a tangible way demonstrate how the region’s trading regime can be used to create sustainable economic opportunities for our people”, said Edward Greene, division chief, Technical Cooperation Division of the Caribbean Development Bank. The projects also represent a practical example of CDB’s commitment to our partnership with Suriname, and we look forward to supporting the government and private sector in Suriname in the successful execution of these projects.”

“Developing the Export-Readiness of Suriname’s Agrifood Enterprises for the CARICOM Market” is a project being implemented by the Suriname Business Forum (SBF) and funded by the CSME Standby Facility to improve relationships between Suriname-based agrifood exporters and importers and distributors in two targeted CARICOM markets – Barbados and Trinidad. Once completed, the project will improve the delivery of export development support services by the Ministry the SBF. The SBF will identify businesses in the agricultural sector to receive capacity-building support to increase their ability to export to CSME member states.

The two projects form part of the relationship between CARIFORUM (the grouping of CSME member states plus the Dominican Republic) and the European Union. The two facilities are managed by the Caribbean Development Bank.