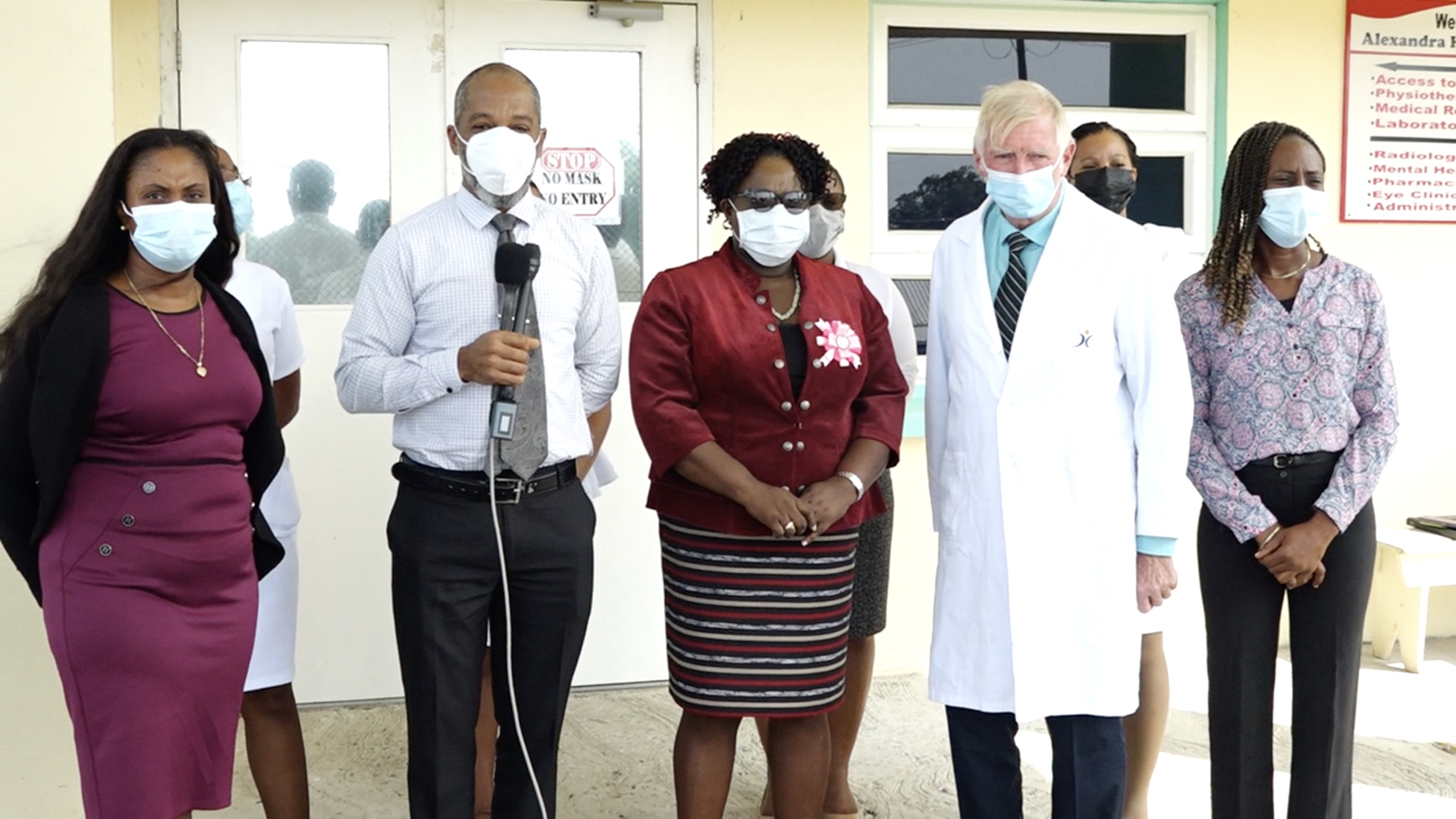 NIA CHARLESTOWN NEVIS (October 25, 2021) — History was made at the Alexandra Hospital in Nevis on October 16, 2021, when the first bilateral mastectomy and breast reconstruction surgery was performed on a cancer survivor.

The procedure was successfully done by Dr.  Patrick Meredith, a Plastic Surgeon from Switzerland affiliated with the Rejunoviva Medical Clinic on the island. October 21, 2021, Hon. Hazel Brandy-Williams, Junior Minister of Health in the Nevis Island Administration (NIA) while announcing the landmark surgery described the procedure as an important one for health care on Nevis.

“I am told that it is the first of its kind ever to be performed in the federation… I want to place on record our thanks to Dr. Meredith for coming to Nevis and now he has made Nevis his home.

“This surgery is important because it brings hope to those women who would have lost their breasts due to breast cancer. They now have a chance to have breasts implanted and so they can continue to lead normal and healthy lives,” she said.

The Junior Health Minister said it is meaningful that the surgery was performed during Breast Cancer Awareness Month which is observed annually in October.

Mrs. Brandy-Williams expressed gratitude to Dr. Meredith and Dr. Tyrone Gill for their role in the life-saving surgery.

“I also want to place on record my profound thanks to Dr. Gill who for some reason his path and Dr. Meredith’s path would have crossed and so because of that we are happy to have Dr. Meredith in Nevis, and based on what he has said to me, he is here to stay. So thank you Dr. Meredith for coming…

“The contribution that you are about to make would be a huge one and we welcome you warmly not only yourself but also your partner,” she said.

Meantime, Dr. Meredith explained the significance of the surgery which he says saves lives.

“This surgery was a very important case because it is a surgery for prevention of breast cancer in a very particular situation. The patient had a mutation of the breast cancer gene 1 and also 2 but mainly the 1.

This mutation occurs in about 20 percent of the female population in the West Indies…Patients with that mutation will, after the age of 50 have a 95 percent chance of unilateral or even bilateral breast cancer, and this breast cancer will be aggressive because it is not subject to any efficient chemotherapy. So, the risk of death once that breast cancer is present, and it’s 95 percent in people after the age of 50, is about 80 to 90 percent death. That is very important. So it is not a cosmetic procedure. It is a medical procedure to avoid a life-threatening situation and huge costs if these breast cancers were to evolve…The important thing is that this patient will not have breast cancer ever,” he said.

The plastic surgeon commended all who were a part of the successful surgery including the theatre staff at the Alexandra Hospital.

“The operation takes between three and four hours. In this case, I was so well accompanied by the staff of the operating theatre who are very competent, great anesthetists. Dr. Gill was assisting as well. We had finished in less than three hours with very, very, very little blood loss, so no need for blood transfusion,” he said.

After six weeks the patient can engage in sporting activities and in aggressive sports after three months.

Dr. Meredith can be reached for consultation through the Rejunoviva Medical Clinic at Pinney’s Estate or via the Alexandra Hospital.