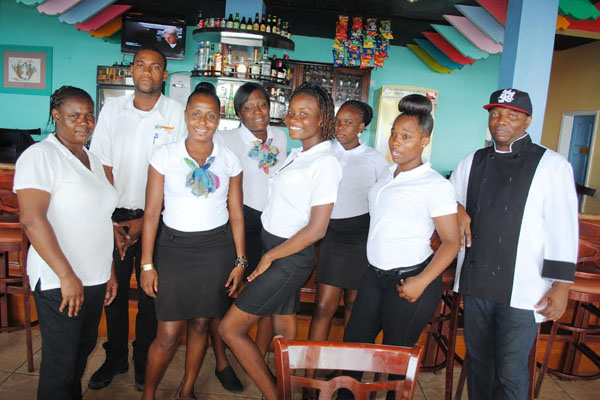 Basseterre, St. Kitts (October 21, 2014) — Kittitian culinary arts master, Mr Keith Hobson, has experienced the highs and lows of the Federation’s tourism industry, and is thanking the People Employment Programme (PEP) for positioning him on the high.

The man who loved being in the kitchen, Mr Hobson did all he could after leaving high school to ensure that he remained in the career that he chose, culminating by his doing online courses that earned him a diploma in Culinary Arts and Gourmet Cooking.

With such a profile, one would have expected Mr Hobson to be a high flier in the hospitality industry. He sure was, having worked for some of the best tourism plants in the country. But when the lows hit, he was carried by the tide and ended up doing security jobs until PEP’s Project Manager Mr Geoffrey Hanley threw him a life line.

He is now the proprietor of one of the Federation’s high end restaurants, Sweet Lime, on Port Zante and he is thanking God first, and Mr Hanley of PEP secondly for bringing him thus far.

Mr Hobson’s story reads like a fairy tale on the tropical paradise that is the Federation of St. Kitts and Nevis. After working for big names like Jack Tar and the Marriott in St. Kitts, he ended up as a security personnel at the Air and Sea Ports Authority and finally at Mapau Casino.

“It dawned on me one day, last year September and I went in to the boss and I told him that Sweet Lime was shut down, yet there was equipment in the kitchen lying down gathering dust,” recalled Mr Hobson in an interview last week.

“He asked me what I wanted to do and I told him I would be grateful if he could rent the place. He told me that other people had come to check the place, but nothing went on. He asked me if I was sure if I wanted to get on with it, and even wondered where I would get the money.”

Rent at Port Zante is high, it being a prime location. He had some saving that he would put in and while that was going on, he heard about the People Employment Programme and what it was doing in the country and felt that his business could benefit from the programme.

After a two-year lease was signed, Mr Hobson approached PEP’s Project Manager Mr Hanley and telling him of his new venture, asked how the programme could assist him to have the restaurant start running as the new tourist season was just around the corner.

“When I called Mr Hanley, he said, ‘Mr Hobson I will see what I can do for you, just give me a few days and I will get back to you’,” explained Mr Hobson.“He really stuck to his words as one day I saw two PEP facilitators in Hospitality, Mrs Joan Millard and Mr Dominic Stevens, and I said to them that I was looking for some girls to help me at the restaurant.”

At the beginning of November, PEP sent in their outstanding persons in the hospitality class, eight female bar/front workers and one male bar attendant. Apart from the PEP workers, Mr Hobson had four other employees and as the business took off, PEP workers unanimously elected one of their own, Ms Saska Jeffers to be their supervisor.

“I told the PEP girls, we are going to start small and see where we go from here,” commented Mr Hobson.“I said I am going to put a simple menu together and see what revenue we can bring in then we can change as we go. They said okay. So we started with a simple menu.”

The restaurant took off buoyed by the traffic brought in courtesy of the high tourist season and Mr Hobson said that the PEP staff performed exceedingly well. He noted that while PEP paid them for the mandatory 40 hours, he paid all the overtime hours the worked including Saturdays, Sundays and holidays. They also benefited from tips that were equally shared every two weeks.

But when the high tourist season came to an end, Mr Hobson had the option of giving them work on reduced days, like two or three days in a week, or even send them home as other establishment normally do, but he kept them fulltime because of PEP’s involvement.

They have come full circle and a new tourism season is upon them. Said Mr Hobson: “We are here still, the business went through the season. We thank God because when we came out from the season we were in a little bit better position than where we started.

“I must give God thanks, and thank Mr Geoffrey Hanley, and thank the Prime Minister the Rt Hon Dr Denzil Douglas for coming up with the idea of PEP because since these girls came here, I do not think the office had any report that they are not doing their work. They come to work. If you want them to work Sunday to Sunday they are here.”

According to Mr Hobson, if his lease is renewed, he hopes to take on at least four of the PEP workers on a fulltime basis because he won’t want to do it if he were not sure that the lease would be renewed. But in the meantime, the workers are enjoying extra pay for working over and above the stipulated 40 hours per week.

With the assurance by the Minister of International Trade and Tourism the Hon Richard Skerritt that over one million cruise passengers will grace our shores in the tourism season just started, Mr Hobson sees and appreciates Prime Minister the Rt Hon Dr Denzil Douglas’ far-sightedness in launching the People Employment Programme.