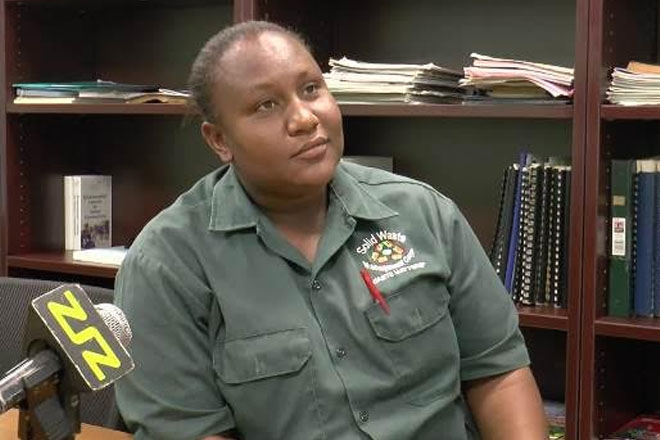 (ZIZ News) – Earlier this week, ZIZ learnt that Landfill Supervisor at the Solid Waste Management Corporation [SWMC], Yvonne Brown, had been selected to participate in a six-week training programme in Japan.

On Wednesday, our reporter caught up with Brown at her workplace in Taylor’s where she gave an overview of her trip.

“The purpose of me going to Japan is a training course that has been going on for years, a partnership between the St. Kitts Government and the Government of Japan, partnering in CARICOM states,” Brown said.

The course is being dubbed ‘Sustainable Solid Waste Management in CARICOM Countries’ and will be held in Okinawa, Japan.

Brown, who has been working at the SWMC for 13 years, said she was thrilled to be selected.

“I was excited. I didn’t say anything really, I just accept the offer because the offer came at me two times already and I turned it down because of my kids. They were very small. They’re still small but I grasp this opportunity now to go out and get more education of the landfill,” she explained.

The dedicated Brown predicts that she will be better equipped to carry out her duties upon return to St. Kitts in six weeks.

The Sustainable Solid Waste Management in CARICOM Countries course comes as a result of the partnership between the Government of St. Kitts and Nevis and the Japanese Government, through the Japan International Cooperation Agency (JICA).