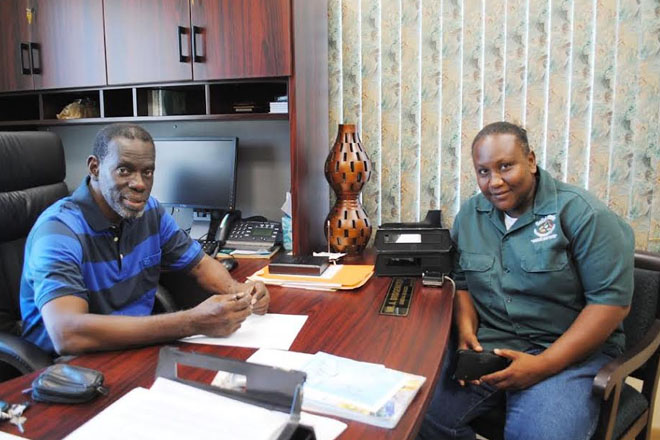 Basseterre, St. Kitts — The Solid Waste Management Corporation (SWMC) St. Kitts continues to benefit from a partnership between the government of St. Kitts and Nevis through its Ministry of Foreign Affairs and the Japanese government through the Japan International Cooperation Agency (JICA).

“This is something that has been going on for some years,” said Solid Waste’s General Manager Mr Alphonso Bridgewater. “In fact we have benefitted at Solid Waste in St. Kitts, and Solid Waste in Nevis by virtue of getting four people trained.

“From Nevis we had the former General Manager of the Nevis Solid Waste Management Corporation, Ms Carlyn Lawrence, and here in St. Kitts we had previously the Operations Supervisor Mr Wilmon McCall, Landfill Site Operator Mr Devon Liburd, last year we had Mr Sylvester Wattley who is a loader, and now we are going to have Ms Yvonne Brown.”

The course will be of six weeks in duration and according to Mr Bridgewater, JICA gets a number of specialists and experts in the area of solid waste management who provide the trainees with an opportunity for learning in areas which they have expressed they want some exposure, experience or enhancement of their expertise.

It is a tailor-made course which is attended by about 15-20 persons and they have opportunities where they will be focusing on specific things in which they want from the said training programme, and that way they would return to their respective countries better equipped to help.

“We have had three persons from St. Kitts who have attended the course, and one of the things that we have them focus on is ‘composting’, so much so that we now have a compost station at the landfill,” said Mr Bridgewater. “Each one of them goes and comes back with a project that s/he is going to focus on.

“In the case of Mr Sylvester Wattley he did a utilitarian orientation, so we have been using him in a utility area and he has specialised since coming back here because everywhere we put him, we seem like we do not want to remove him from there. He has demonstrated such excellence, so to speak.”

According to the General Manager, Ms Yvonne Brown’s area of specialisation will be on landfill management in general. He added that she has a particular interest in composting situations on the landfill in particular and she will be working on that aspect.

“When she comes back she will be of better use to the country,” said Mr Bridgewater. “I have no doubt about it because even on the job she gets some on the job training and she is a very enterprising lady. She came in as a Litter Warden in the first instance and we transferred her to the landfill. She still has the Litter Warden status and all the authority of a Litter Warden.”

Ms Brown, after having been transferred to the landfill, took it in good stride and started off doing mainly the weighbridge attendant job where she dealt with on and off the bridge procedures. Later additional functions were passed on to her and at times she even supervises the operations on the landfill.

Now a veteran of 13 years at Solid Waste Management Corporation, Ms Yvonne Brown indicated that her job as a weighbridge operator includes attending to customers as they get to the landfill, where they come on the scale for her to take their weight and she prints a ticket which she gives to them be it cash or invoice.

She also supervises persons working in the yard and the landfill on a whole. She said that the opportunity that has been extended to her to go for the six-week training programme in Japan will reshape the way she operates and hopes to share what she would have learned with her colleagues.

She has been taking pictures of the several operations at the St. Kitts landfill as she is expected to make a power-point presentation during her stint in Japan.

“During the course I will better understand operational issues about the landfill and waste management, learning about recycling and stuff like that, because Japan is very advanced in that respect,” said Ms Brown who leaves on Thursday October 8 for Trinidad from where she will get a visa for Japan.