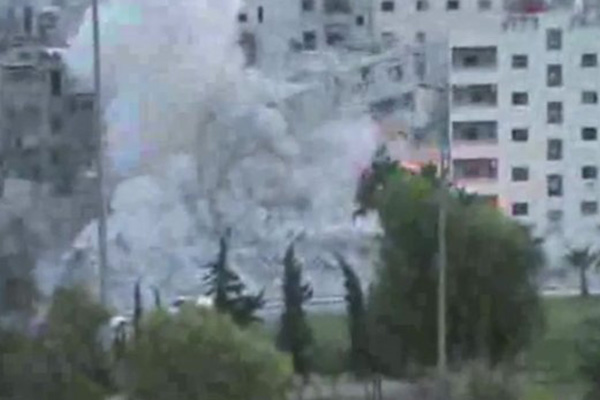 (BBC) — The Syrian government has been “deliberately and unlawfully” demolishing thousands of homes, a new report by Human Rights Watch says.

Satellite images appear to show large-scale demolitions with explosives and bulldozers in opposition strongholds in Damascus and Hama in 2012 and 2013.

The report says the apparent wanton destruction of civilian property and collective punishment are war crimes.

It comes as government and opposition delegates attend peace talks in Geneva.

On Wednesday, UN envoy Lakhdar Brahimi admitted he did not expect there to be any substantial progress during the current round of negotiations, which are scheduled to end on Friday.

‘Wiped off the map’

Human Rights Watch’s report, Razed to the Ground, documents seven cases of large-scale demolitions which it says took place between July 2012 and July 2013.

Satellite images, online videos and eyewitness reports suggest they were carried out by government forces, it concludes.

The satellite images show seven districts of Damascus and Hama before and after the demolitions.

In many of the images, buildings – many of them blocks of flats several stories high – have been reduced to rubble.

HRW said it had documented the destruction of at least 145 hectares of building land – a total area equivalent to about 200 football pitches.

Thousands of families had lost their homes as a result of these demolitions, it added.

“Wiping entire neighbourhoods off the map is not a legitimate tactic of war,” said Ole Solvang, an HRW emergencies researcher. “These unlawful demolitions are the latest additions to a long list of crimes committed by the Syrian government.”

He added: “This was collective punishment of communities suspected of supporting the rebellion.”

HRW demanded the Syrian government immediately end the demolitions, saying they were in violation of international law, and provide compensation and alternative housing to the victims.

It also urged the UN Security Council to refer the situation in Syria to the International Criminal Court.

Government officials told HRW that the demolitions were carried out in order to remove illegally constructed buildings.

However, the New York-based group found that there had been no similar demolitions in pro-government districts.

The demolitions were also supervised by military personnel and often followed fighting in the areas between government and rebel forces, it said.

Several residents also told HRW that they had all the necessary documentation for their homes.

They added that government forces had given little or no warning of the impending demolitions, and that they had not been allowed to remove their belongings.

“No-one should be fooled by the government’s claim that it is undertaking urban planning in the middle of a bloody conflict,” Mr Solvang said.