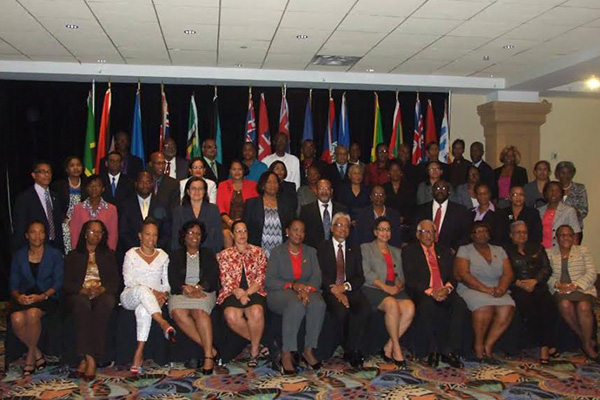 TACS meeting shows importance of UWI to SKN and the region

Basseterre, St. Kitts  (SKNIS) — On February 13 -14 the Technical Advisory Committees (TACs) of the University of the West Indies (UWI) Campuses, Centre and University Hospital, held its annual meetings of Governments in St. Kitts to discuss the advancement of the institution.

Every year 16 Governments in the region, who support UWI, discuss its activities and how much monetary assistance they will need to continue.  Each country will then decide what their contribution will be to that budget.

“The Government of St. Kitts and Nevis is one of the founders of UWI -which was started in 1948- and has continued its support for the institution,” stated Professor E. Nigel Harris Vice Chancellor of UWI. He added that UWI in turn works with Kittitian and Nevisian students to broaden their education opportunities.

“We not only have students going to the various campuses in Jamaica, Barbados [and] Trinidad, we also have the open campus which enables distance education programs to come to students in St. Kitts,” he said. “This University is really an integral part of who we can become and what we can become in the Caribbean.”

St. Kitts and Nevis’ Minister of Education Hon. Nigel Carty stated that the future of education is bright for locals not because of local efforts alone but because his Ministry is forging closer and stronger relationships with partners such as UWI to build capacity and sustainability and to expand opportunities for tertiary level education.

“Our collaborations centres around moving our programme beyond the traditional academic programmes by adding capacity building programming for Technical and Vocational Education and Training (TVET), which is the thrust of our nation to prepare our citizens for critically needed skills based employment and entrepreneurship,” he stated.

Minister Carty noted that high on the agenda in this regard is agriculture and mentioned that his Ministry is pursuing active collaboration for programme development in Agrotechnology and Agribusiness. He further noted UWI is in a position to provide the requisite support “to move us in this critically new direction.”

Prime Minister the Rt. Hon. Dr. Denzil Douglas stated that UWI is “a cherished symbol of our forward movement as a Caribbean people.” He expressed his honour for the institution as St. Kitts and Nevis “has long had very fierce appreciation of the power of education to transform lives to expand options.”

The Prime Minister added that UWI is vitally important to the region as a whole.

“A Caribbean without this institution of higher learning [would be] one that is so uniquely and thoroughly arid and dessert like indeed,” he expressed. “Thankfully however, we do have UWI where the intellectual curiosity, the energy and the fire power on which vibrant, resilient societies depend are on any day and on any campus in great abundance readily found.”