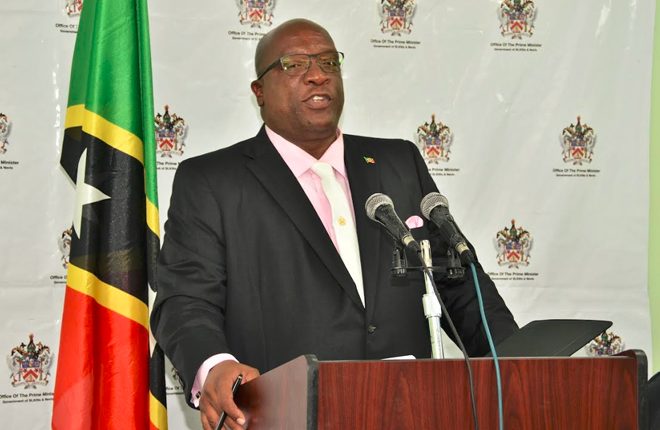 (PRESS SEC) — Prime Minister Dr. the Honourable Timothy Harris said during his press conference on Wednesday, February 1st that the Royal St. Christopher and Nevis Police Force conducts ongoing engagement with regional and international agencies in its efforts to curb and solve gun-related homicides and violence.

The Honourable Prime Minister further stated that his Team Unity Government plans to strengthen and expand its own engagement aimed at crime reduction, and the Ministry of Foreign Affairs will play a vital role in advancing the dialogue with regional and international allies.

“The government intends to step up the level of engagement,” Prime Minister Harris said, noting that, “We have therefore invited the Ministry of Foreign Affairs to become further involved in these discussions with our allies.”

Dr. Harris, who is the Minister of National Security, continued: “We have to ensure that our coasts are being monitored and that we can have cooperation, using equipment and intelligence from our neighbours to assist in the fight against crime. Guns are not manufactured here, and the fact that they continue to be available is a matter of concern so we are going to look both within and without [outside of the Federation] in order to bring solutions.”

After being trained by UNLIREC, 20 junior-ranking officers in the Royal St. Christopher and Nevis Police Force received certificates in Operational Forensic Ballistics on Friday, September 4th, 2015 at the Police Training Complex. Speaking then, the course facilitator Mr. Mark Mastaglio, a Senior Forensic Ballistics Technical Adviser for UNLIREC, said that, “This is only the start of UNLIREC’s participation with St. Kitts…Much more is in store for next year.”

UNLIREC’s technical assistance to St. Kitts and Nevis and other Caribbean countries in 2015 and 2016 consisted of the UN agency assisting national authorities with assessing their ballistic forensics capabilities, as well as developing national action plans, national competency testing frameworks and standard operating procedures. All of UNLIREC’s projects are undertaken upon request by Member States.

Two months after the completion of that UNLIREC training course, Prime Minister Harris visited the Forensic Unit in the Royal St. Christopher and Nevis Police Force on Thursday, November 12th, 2015 to inspect a new piece of equipment: an Olympus SZX16 comparison microscope.

A little more than one year later, on Wednesday, February 1st, 2017, the Honourable Prime Minister announced at his press conference that Mr. Narace Ramnarine of Trinidad and Tobago, who has 26 years of law enforcement experience in that country, is the new head of the Forensic Unit in the Royal St. Christopher and Nevis Police Force. Dr. Harris assured Mr. Ramnarine, who was in attendance, that, “Whatever resources you need, we will provide.”

Prime Minister Harris then addressed the citizens and residents of St. Kitts and Nevis, who were listening to his statement during the live press conference, saying: “He [Mr. Ramnarine] will now lead and transform our Forensic Unit into a world-class effort.”