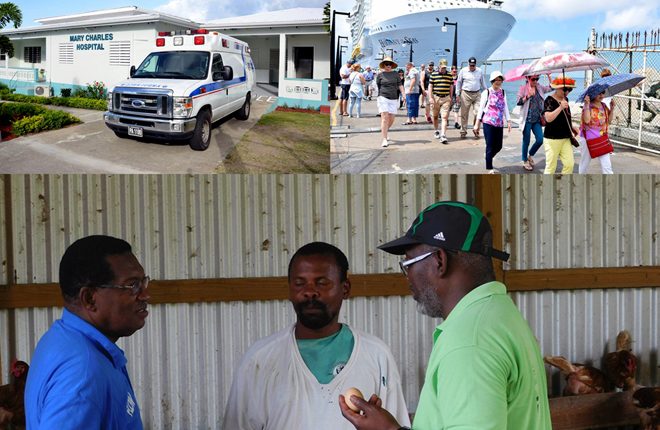 (Press Unit in the Office of the Prime Minister) – St. Kitts and Nevis’ Prime Minister, Dr. the Honourable Timothy Harris, said the good news stories created through the hard and dedicated work of the three-year old Team Unity Government can be felt through many sectors across the Federation – from the advancements in the delivery of primary healthcare services to a robust tourism industry.

Addressing a vibrant audience at Tuesday (February 27) night’s town hall meeting at the Joshua Obadiah Williams Primary School in Molineux, Prime Minister Harris outlined a variety of accomplishments of his administration that have redounded to the overall benefit of the people of St. Kitts and Nevis.

In the area of healthcare, the prime minister said for the first time ever under Team Unity MRI services are available to the ordinary citizens of St. Kitts and Nevis, “so that people would not have to go around begging on sponsor sheets for donations to help them take their loved ones to Trinidad, to Puerto Rico, to Antigua to get MRI services.”

Dr. Harris stated that when his administration took office in 2015 it was confronted with the serious issue of dilapidation of the Mary Charles Hospital.

“Within a year and a half we delivered a brand new expanded Mary Charles Hospital. We did that so if something was to happen to anyone of you here in Phillip’s, in Mansion, in Saddlers, in Parsons, in Cayon, your first point of reference – according to the zoning of our health service – is Mary Charles,” Prime Minister Harris added.

Under the Team Unity Administration, the Federation’s tourism sector continues to grow and this has led to St. Kitts and Nevis receiving several accolades and international recognition. This include being named among the “22 Hotspots of Where to go in 2018” by Bloomberg Pursuits and listed as one of the “Top 21 Places to Travel in 2018” by the Robb Report.

Furthermore, Prime Minister Harris referenced the increase in cruise ship passenger arrivals in St. Kitts and Nevis since 2015, noting that the Federation welcomed over 1 million cruise passengers from 2015 to present.

The prime minister noted that his Government is also in the process of establishing a fund of over $1 million in the first instance to assist individuals serious about a career in farming. That fund is expected to be introduced in March, 2018.