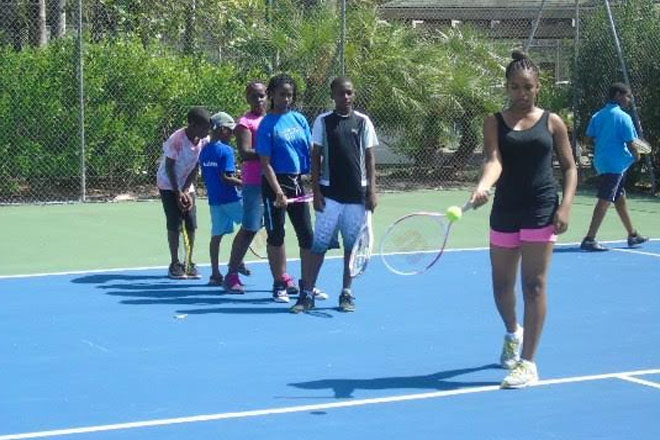 Sports Page — Tennis professional Kip Koross is convinced that more should be done to ensure that young persons on Nevis learn to play the game of Tennis.

The Kenyan born coach who got his Four Seasons contract due to his association with the Peter Bowers International organization, which is an organization that selects certain professionals to work with huge businesses across the world, spoke to the media as he assisted in the Youth and Sports Department summer Tennis camp.

He pointed out that because of the fact that he attended a Catholic school while in Kenya, he got the opportunity to learn the game of Tennis and excelled sufficiently to land a scholarship which provided free higher education in the United States of America. He excelled academically and in Tennis at the Mid Western State University. He played the number one position while he was there and also secured a BA in Biology.

He indicated that his son has since landed a similar scholarship and is currently pursuing studies at a university in the USA.

He later successfully completed a coaching course and has coached in various countries and is currently the Tennis professional at the Four Seasons Resort in Nevis.

He indicated that the children who commenced their annual summer Tennis camp at the Four Seasons Resort on Monday 10th August, all appear enthused and stated that one young lady told him that she wants to be a Serena Williams.

He feels strongly that this program should be extended and is willing to assist with further lessons even after the camp is concluded.

He wants the Nevisian public to know that there are many educational based opportunities through Tennis and does not rule out the possibility that one or more of the young ones at the camp, may one day make it big in the sport.

Also assisting the children at the summer camp is the former President of the local Tennis Association, Anthony Webbe.

He indicated that he has seen several children with quite some potential throughout the years and is also convinced that one day, the program can be the driving force to the birth of a major Tennis star from the island.

The program has attracted almost twenty children and is set to conclude on Friday 14th August with a presentation to the children which will include rackets which were sourced from specially arranged funds from a program coordinated by the prestigious hotel.