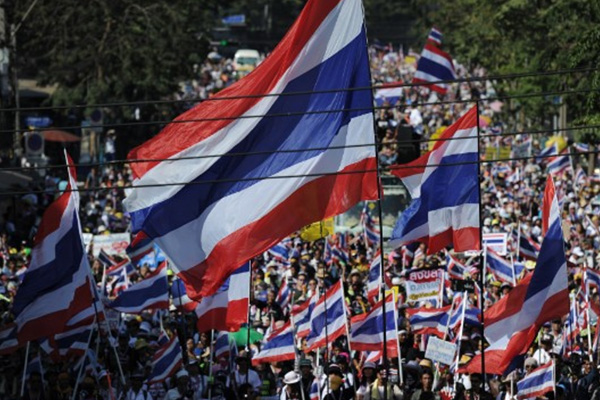 The protesters have laid siege to major intersections in Thailand’s large and hectic capital city. At their peak on Monday evening, they numbered as many as 170,000, said Lt. Gen. Paradon Pattanathabut, the nation’s security chief.

But their numbers have since declined to around 20,000 by Tuesday morning, Paradon said, as demonstrators returned to their homes in the Bangkok area and went to back to their jobs.

Their ranks may swell again by the evening after people finish work, he said.

The protesters, who say they want Thailand’s political system overhauled instead of new elections scheduled for next month, occupied seven main intersections and blocked one government office on Monday.

Groups of them marched to several government buildings on Tuesday, including the labor, commerce and foreign ministries. In each case, the protesters entered the offices for a short period and then left — a form of symbolic occupation.

Their activities are all part of an effort dubbed “Bangkok shutdown.” It’s orchestrated by the People’s Democratic Reform Committee (PDRC) protest group, led by Suthep Thaugsuban, a former deputy prime minister for the opposition Democrat Party.

The government has offered talks with protesters and other concerned parties to discuss a way out of the impasse and the possibility of postponing the election. But Suthep’s group has rejected the offer.