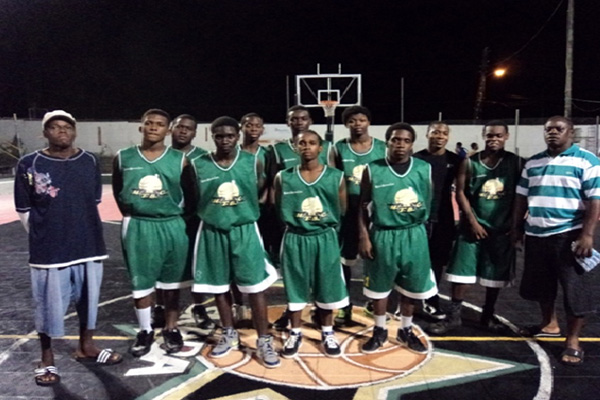 On Saturday 11th January 2014 a small crowd was on hand to witness a thrilling epic when the McKnight Trotters Junior Basketball Team and the “Keep on Balling” (KOB) Bird Rock Basketball Team faced off for the title and bragging rights as the the Achievers Sports Club Junior League Champions. of Youth Basketball Competition.

The Achievers Sports Club under the directorship of Mr Kenroy ‘Romel’ Tobias has been organizing these Out-of-Season Basketball Competitions annually for the past five(5) years with the exception of 2012.   While basketball clubs across the island play host to several community competitions, the Achievers Sports Club hosts a Junior League and a Business League.  The club also holds the Naithsmith High School Basketball Competition.  The club’s Junior Team had won the first three years, but Saturday 11th January 2013 did see a new champion- the KOB Bird Rock Basketball Team.

The finals of the competition as stated in an earlier communiqué came down to the third game – winner takes the crown.  The KOB started much stronger than in the previous game scored the first two (2) baskets holding a lead of 4pts to nil.  However, the Trotters then stringed a number of baskets and soon took the lead.  Trotters maintained this lead but failed to put the game out of the reach of KOB which continued to trail by just a few points.  As the teams traded baskets and equally missed several free throws, the third quarter ended with Trotters ahead by 2 points – 29 – 37.

The third quarter saw KOB equalling the score and going 2 points ahead by some heroic efforts of #6 Jared Clarke, who played the point guard.  He literally took the game for the KOB to the Trotters.  However, both teams continued to exchange leads.  The point guard for Trotters #25 Kenrick Morris gave his team back the lead after sinking a huge 3-pointer breaking the tie 43 -43, thus the score 43 -46 to Trotters.  With 1:43 left in the game, Jared Clarke sinking his 3-pointer tied the score at 46 all.  Excitement reigned as each team battled to maintain the lead in the dying moments of the game.  48:2 secs, and Rafiki Nisbett #23 on the free throw line sank the first putting Trotters ahead by one point but sadly missed the second.  Thus the score was 47 – 48 to Trotters.  All eyes turned to Jared as he was expected to take the last shot of the game, but it was # 3 Zikomo Simmonds left wide open buried the basket, his only points for the night, and gave the lead back to KOB with just 3:29 seconds on the game clock.

The score at this time was 49 – 48 in favour of KOB Bird Rock.  Trotters in-bound the ball from the sideline but was unable to score as the buzzer sounded and the game was over.  “Keep on Balling” Bird Rock under the command of Sasha Lloyd as Manager and Assistant Coach and Jabari Trotman emerged winner of the “Best-of-Three” Finals of the Achievers Sports Club Junior Basketball Competition.

In related news, the Naismith High School Competition which was postponed due to the inclement weather and the festive seasons will resume next week.  The schools involved in this tournament are the Immaculate Conception Catholic School, the Basseterre High School, the Cayon High School and the Washington Archibald High School.  With just four (4) more games to be played this competition will conclude before the start of the Annual SKNABA Junior League which will commence on February 15th 2014.