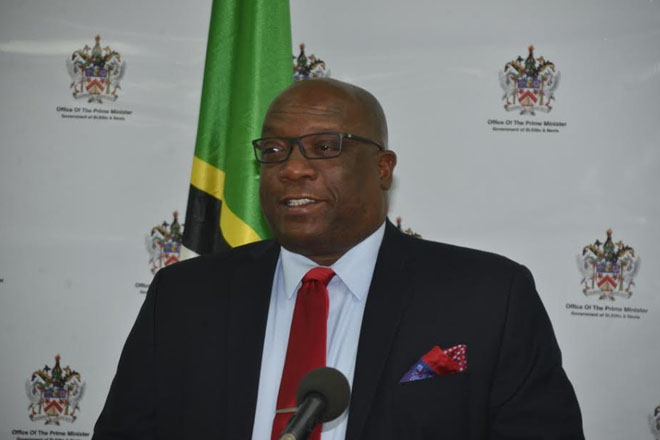 The Government of St. Kitts and Nevis continues to be transparent and accountable

(SKNIS): During his monthly press conference on Wednesday, April 20, Prime Minister Dr. the Honourable Timothy Harris, updated the general public on the affairs of the Government as it continues its efforts to bring transparency to nationals and residents alike both at home and abroad.

“I am pleased to take this opportunity, once more, to update our citizens and residents on pertinent matters of State,” said Prime Minister Harris. “My Government takes seriously its responsibility to account to our people regularly and honestly. In this regard, we have expanded on opportunities to engage the public beyond my monthly press conference, to include our popular “Working for You” Programme which hosts and holds not just the Prime Minister, but his Cabinet of Ministers and Senior Government Officials responsible to account to the people.”

Prime Minister Harris in his opening statement touched a little on parliament and noted that the Government “institutionalized the Parliament as the corner stone institution for Ministers to report to the country”. He noted that such a feature will continue because it “enhances the role of Parliament in the Westminster Model at the fulcrum of a system of accountability”, “Perhaps our next step will be to introduce some form of the UK’s “Question Time” to our Parliamentary system,” he said.

Dr. Harris made mention of the Government’s E-portal that was launched in February 2016.

“I want also to say that it is an important part of our commitment to the accountability framework to be providing essential information to the people of St. Kitts and Nevis in quality and quantity like never before, that we recently launched the new Government portal,” said Dr. Harris, while adding that it contains a wide array of information regarding every ministry. “While it is a work in progress when it has come to satisfactory conclusion it will represent the best of information available about all aspects of this Government. We are a Government for and by the people and we therefore honour our responsibilities to create greater awareness about Government’s actions on behalf of the people.”

Dr. Harris touched on the economy of the Federation and noted that it is imperative for any country to have a stable and thriving economy.

“The economy is of course at the heart of Government’s ability to deliver on its commitments and undertakings to the electorate particularly, as these impact upon the “bread and butter” issues,” said Prime Minister Harris, while noting that the foundation of prosperity and happiness is indeed the economy. “For social progress to be sustainable, it needs a strong economy. For the record the health and wellness of the economy of St Kitts and Nevis is very good.”

Prime Minister Harris revealed that the Government has been receiving consistent commendations for its excellent management of the economic and fiscal affairs of St Kitts and Nevis. He spoke briefly of the Caribbean Development Bank (CDB) February Review of Economies of its borrowing Member States and noted that the review highlighted St Kitts and Nevis as the best performing member of the CDB for 2015.