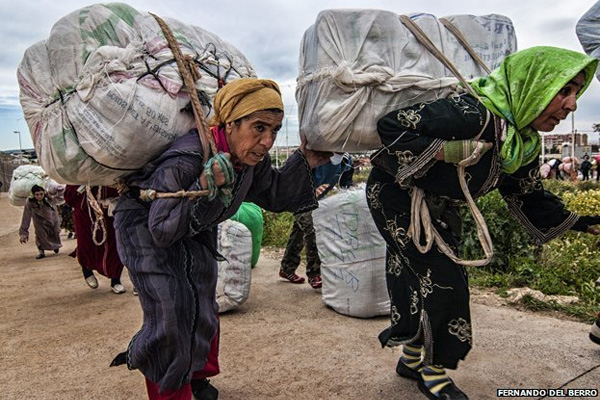 The heavy-lifting ‘mule women’ of Melilla

(BBC) They are known as the mule women of Melilla. Every day they carry heavy loads across the border between the Spanish enclave and Morocco. Melilla is an important entry point for goods in to North Africa – and if the women can carry them, they can be imported in to Morocco duty-free.

In the early morning sunlight, a cloud of dust hovers close to the 6m-high fence that separates Melilla from Morocco. The dust is kicked up by frenetic activity as traders prepare goods to cross the border. There are second-hand clothes, bolts of fabric, toiletries and household items, all of it destined for markets in Morocco and beyond. Thousands of people are here and the noise is deafening – a cacophony of revving engines and raised voices.

Massive bales are everywhere, all wrapped in cardboard, cloth and sacking and fastened with tape and rope. And under the immense bales, obscured and bent double by the size of their loads, are Moroccan women. They are the mule women of Melilla, known locally as porteadoras.

This commerce takes place daily at Barrio Chino – a border crossing from Melilla to Morocco for pedestrians only. As long as a porteadora can physically carry her load, it is classed as personal luggage, so Morocco lets it in duty-free. The women have the right to visit Melilla because they live in the Moroccan province of Nador. But they are not allowed to reside in the Spanish territory.

Latifa claims her place in one of the rowdy queues made up of hundreds of women, and drops her load of 60kg (132lb) of used clothes. She has been doing this work for 24 years and will be paid three euros ($4.10 or £2.60) for transporting her bale across to Morocco. It is not work she chooses to do.

“I have family who must eat,” she explains. “I have four children, and no husband to help – I divorced him because he beat me.”

And then as the queue surges forward, Latifa disappears in a sea of merchandise.

Many of the women who work as porteadoras are divorced or separated like Latifa, single mothers providing for their families. Life is difficult for them in Morocco’s traditional society, and often this is the only work they can get. Some of them make three or four trips a day from Barrio Chino, carrying up to 80kg.

Rates of pay vary and the women complain they must give bribes to the Moroccan guards.

In Melilla, there is debate about whether this trade should be allowed to continue in its current form.

“These are women who are risking their lives – there have been deaths as a consequence of this physical labour. It’s carried out in conditions of semi-slavery,” says Emilio Guerra, from the Union Progreso y Democracia political party. “What we would like is that they work under a concrete set of rules in conditions that aren’t precarious.”

“There are very positive outcomes of this commercial activity. For some of the porteadoras it’s the only chance they have of making a living. Sure, it’s really hard work, but some of them get an income that’s larger than the average income of workers in Morocco.”

And the benefits of the trade to thousands more Moroccans and their families – those who sell the goods in their shops, or export it again to countries further south – are huge.

Lopez estimates that this informal trade is worth about 300m euros to Melilla, and calls it “atypical”. Others call it smuggling, and believe it is worth perhaps twice that.

Back at Barrio Chino, there is a pervading atmosphere of semi-hysteria. The gates close at midday so the pressure is on to get across to Morocco and return for the next consignment.

“It’s a little bit quieter today,” says Arturo Ortega, an officer with the Guardia Civil in charge of maintaining order and preventing human avalanches that risk serious injury to the porteadoras.

“If you come here every day you begin to think that what you see is normal. But it isn’t normal.”

Hasna is leaning against a barrier, without a bundle of anything. In front of her is a mob of young men, all of them loaded up.

“The men are taking our places,” she complains. Traditionally, the porters here have been women. Now they face competition from unemployed Moroccan men, and Hasna is having difficulty getting through the crowd to pick up her bale. She has one child and a sick husband. And she is six months pregnant. That does not deter her.

“If I do one trip today, I’ll be paid five or six euros,” she says. “If I could find another job cleaning houses or cooking, I wouldn’t do this. But at the moment, there’s no other work.”

Also watching the men is Maria. She stands out because she is leaning heavily on a crutch.

Unusually for the porteadoras, Maria speaks a bit of Spanish. She explains that she injured her leg when she fell in the queue – she has also had a breast tumour. Maria has been here all morning, but confronted with the chaos at Barrio Chino, she does not feel well enough to work. Today she will return home without earning any money.

Maria lives just the other side of the border from Melilla in Beni Enzar. She has two rooms that she shares with her three daughters. There is no running water – a neighbour lets her use a tap at his house. Maria used to be married and worked as a waitress. But four years ago her life began to unravel. After being diagnosed with cancer, her husband left. Maria was pregnant at the time with her smallest daughter, Malak.

“The doctor said I would lose the baby with the treatment. But she was born alive. That’s why I called her Malak – it means angel.”

While Maria talks, her two oldest girls listen. Neither is in school – they stay at home and look after their little sister while their mother is at Barrio Chino. They worry about their mother.

“This is not the first time she has injured her leg and the doctor says she shouldn’t carry anything heavy,” says 16-year-old Ikram. “She only works as a porteadora so that we can eat.”

Maria is incensed by the idea that her daughters might be forced to become porteadoras too. “It would be better for them to get married,” she says. “It’s dangerous work and there’s no dignity in it. I hate the job but I need it.”

And then Sanaa, who is 13, puts a small skateboard on the table. Maria smiles. It will help her shift merchandise more easily on her journeys across the border from Barrio Chino.