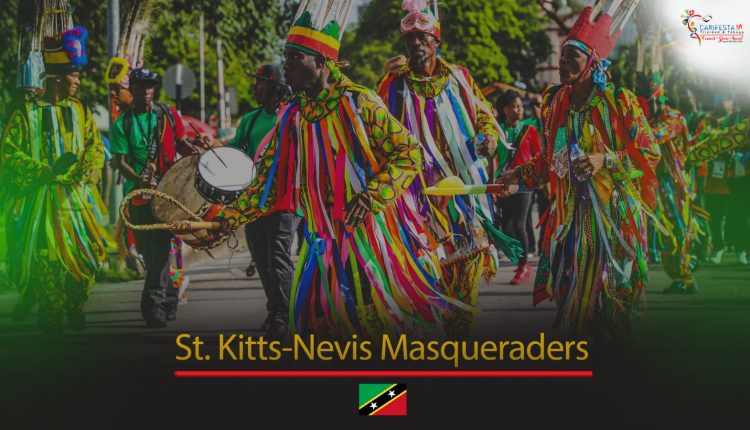 The St. Kitts and Nevis masquerades are darlings of CARIFESTA 14, in Trinidad and Tobago.

The St. Kitts and Nevis masquerades are darlings of CARIFESTA 14, in Trinidad and Tobago.

From an initial performance at the pre-opening parade on August 16 to now, the magnetic spirit that comes with each presentation has transfixed patrons at the regional expo.

Their most recent performances were at the Queen’s Hall in Port of Spain and the Southern Academy for the Performing Arts, in San Fernando.

As the high pitched notes of the flute pierced the evening’s silence, the audience became fixated on the stage.

The big drum and the snare then fused with the flute and the masquerade made their eagerly anticipated entry.

Locals and visitors from throughout CARICOM have embraced the group and have become fascinated with their rhythmic dances, colourful and intricate costumes and elaborate crowns with long feathers.

Masquerades have evolved over time and there have been variations of the art form- as there are obvious differences between St. Kitts and Nevis masquerades and those from Montserrat, who have conical head pieces but the fundamentals still remain. It is an art form to communicate, celebrate and speak our journey from the past till now.

Patrons can expect more of the masquerades as St. Kitts and Nevis has its country night on Thursday, August 22, on the main stage at the Queen’s Park Oval.

Organizers within the contingent have promised delivery of a production that showcases the twin island state and its rich history. The old adage still rings out ‘we small but we tallawah.”