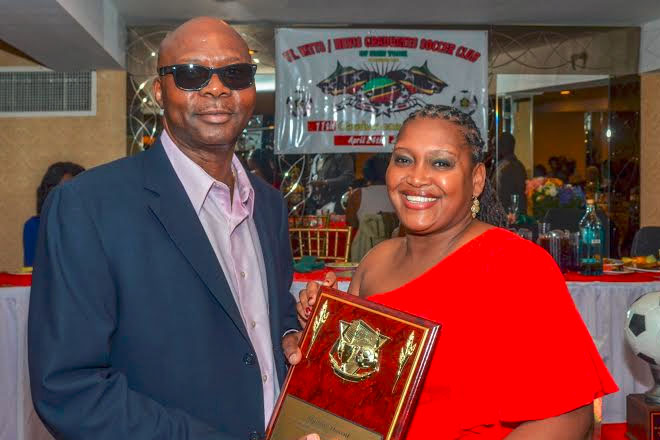 Basseterre, St. Kitts — In what was poised to be a milestone event, the St. Kitts Nevis Graduates Soccer Club celebrated on Friday April 25, 2015, its 11th Annual Soccer Awards & Banquet, at the elite Eastwood Manor in the Bronx, NY.

Guests were treated to the pulsating sounds of the Caribbean from the renowned DJ Buggs, as they arrived and mingled before the start of the event. Friends and well-wishers greeted each other warmly with bright smiles and laughter and the exchange of chatter.

Once the event got started, with renditions of the US and SKN National Anthems, and a prayer/convocation, it was non-stop laughter. This year’s host and master of ceremonies, Rev. Canon Calvin McIntyre, (who had in the past officiated in various capacities) had the banquet hall in a frenzy, as he belted out joke after joke about Caribbean folk tale, incorporating his unique style of wit and humor.

President of the St. Kitts Nevis Graduates Soccer Club, Mr. Pelham Warner got the evening off to an auspicious start with a couple of housekeeping issues and announcements. He then introduced the guest speaker and awardee, Mr. Anthony L. Johnson, LL.B (HONS) L.E.C, who laid out a brief history and development of the state of football in St. Kitts and Nevis, and thanked the St. Kitts Nevis Graduates Soccer Club for its invitation and award.

”Firstly, let me just say that it has been an excellent evening thus far,” Chairman Johnson stated. “I commend the St. Kitts Nevis Graduates Soccer Club for their hard work and contributions and would like to especially recognize this event as a medium for bringing nationals at home, here in the US and those further afield together.”

With regards to the surprise award bestowed upon him, Mr. Johnson expressed, “I was truly surprised and humbled by the gesture. It was really a way, I believe, of solidifying the bond between our two organizations-The St. Kitts and Nevis Football Association and the St. Kitts Nevis Graduates Soccer Club.”

St. Kitts and Nevis’ former Ambassador to the US, Ambassador, Jacinth Henry-Martin whose scheduling conflict prevented her from attending the event, sent congratulatory remarks and well wishes for a successful 11th Anniversary.

The night’s Guest of Honor, Mr. Maurice Dasent, who was introduced by his sister, Fernie Dasent-Bell, gave a particularly warm and inspiring introduction. She spoke about how genuine, thoughtful and dependable a big brother Mr. Dasent was, even as a child.

Mr. Dasent, who was seated at the head table walked forward to the podium to receive his award. “I really, really appreciate this gesture. I’ve been involved in football for a very long time, from player to coach to founder of this very club. I’ve always prided myself in having a full understanding of the game and this award recognizes the passion I have for football,” he stated.

One of the evening’s special invited guests was, Ms. Astonia Carey, who’s a current footballer and student at Concordia College in Eastchester, New York. Although recognized and singled out for her football skills, it was her work off of the field that got the most recognition.

Astonia recently made the Dean’s List and has been awarded several recognitions in her New Media Studies/Department. “First of all, I’m really thrilled to be here,” Ms. Carey stated. I love having this sense and feeling of home where I can identify with nationals such as myself. I’ve been at Concordia for approximately 2 years but it’s really my academics that I’m mostly proud of. I recently scored a 3.5 GPA and I’m proud of all of the support that I’ve received from friends and family.

Minister of Tourism, Honorable, Lindsay Grant, who graced the ceremony with his presence while enroute to a business trip in Europe expressed pleasure at the camaraderie of brother and sisterhood. He chimed in on his personal delight and excitement. “Let me first say that I believe this event is a magnificent one. I want to place on record my support for our youngsters in the US and would wish to do everything in my power to get scholarships for our youths,” he declared.

When asked about bridging the gap between sports and tourism, and the future of sports tourism and its relevance to the Federation of St. Kitts and Nevis, he smiled and took delight in the question. “I’m glad you asked that, and on a broader note, however, I am working diligently to build the gap between sports and tourism. While in Europe, I will be meeting with cricket officials and other business persons to begin to do just that,” Mr. Grant expressed.

The President of the St. Kitts Nevis Graduates Soccer Club closed off the event with a raffle that saw several flatscreen TV’s and other consolation prices being raffled off before patrons headed back to the dance-floor.

Mr. Warner expressed a sense of joy with the grand turnout and welcomed back the audience to next year’s event. “If I may say so myself, I thought the event turned out surprisingly well. It’s always a joy to highlight our young players, past and present, and the St. Kitts and Nevis Graduates Soccer Club remains committed to improving the event. We welcome all input, and we are open to ideas because our thinking is that we should strive to make the event better, year after year.” he disclosed.