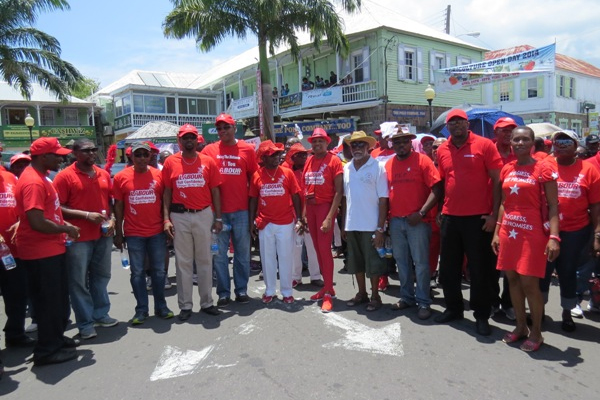 Basseterre, St. Kitts (CUOPM) – It was a carnival-like atmosphere Monday as leaders of the St. Kitts-Nevis Trades and Labour Union and the St. Kitts-Nevis Labour Party led thousands of supporters through the streets of Basseterre to mark the 59th annual celebration of Labour Day in the twin-island Federation.

The crowd, estimated by several independent sources in the region of 15,000 is a sure sign of full confidence in the leadership of Prime Minister the Right Hon. Dr. Denzil L. Douglas and the policies of his governing St. Kitts-Nevis Labour Party Administration.

The huge turnout of support also attracted screaming headlines from SKNVIBES and WINNFM.

“Thousands participate in 2014 Labour Day March,” said SKNVIBES.com while it was “Massive crowds for labour day march,” from WINNFM.

“What a march! What a crowd! What a celebration! I believe that on this march this morning which has gone into the early hours of the afternoon, we have no less than 15, 000 people here on this crowd. And so I want to thank you the people of Labour, the citizens of this country for yet again displaying a massive demonstration of support for the Labour Movement. And so again I say, comrades, friends, fellow citizens I say what a march! What a crowd! What a day – Labour Day 2014 here in St. Kitts and Nevis. I want to say thanks to every single person that has shown support to the St. Kitts-Nevis Trade & Labour Union and secondly to the St. Kitts-Nevis Labour Party, our movement on a whole for this tremendous support,” Prime Douglas told the massive crowd following the return of the marchers to the Patsy Allers Recreation Ground.

He also paid tribute to the late Labour Movement stalwarts.

“This is a great, great Labour Day. And it is great, not just because we just had a fantastic march, but because the march proved that we have a lot, a whole lot, to march about! The first thing we have to march about is the lives of those men who moved heaven and earth for all of us – the Right Excellent Sir Robert Llewellyn Bradshaw; the Right Excellent, Sir C.A. Paul Southwell; the Right Excellent Sir Joseph N. France, His Excellency Sir Lee Llewellyn Moore; the Hon. Fitzroy Bryant; His Excellency E. St. John Payne and Mr. Fidel O’Flaherty – Moore, Bryant, Payne, Mills, O’Flaherty – men who were hated by the powerful, for opening this country’s high schools to every single boy and girl……schools that had always, always, always been locked and off- limits to the thousands upon thousands of everyday ordinary children of our country; they broke down the barriers, they made it possible and today, all of our children, the thousands from both islands can walk proudly into every Secondary School at age 12 years,” said Prime Minister Douglas.

He called on the Nation, not to take lightly and for granted some of the privileges that they enjoy.

“We must not take this for granted because several countries in this Caribbean region do not yet have that privilege of having every single school child at age 12 going into a high school. And so today we have remembered what they have done and we came out in our thousands and we marched, marched in order to show that we remember them, we honour them and we pledge to ensure that their legacy is carried from one generation to the next,” said Prime Minister Douglas.

“I make the point also that today we are not drifting away from where we have come from. We are a working people. We continue to work and we have accomplished as we work and dramatically with our accomplishments and their accomplishments before us, we have changed the look and the feel of our own St. Kitts and Nevis for the better. We are not drifting. We are working and accomplishing. And dramatically changing the look and feel of this country – for the better!” Dr. Douglas.

“Wherever you may be in life in this country, your Government – this Government – has a programme that will help you to move up. I know it! They know it! We all know it! Labour has a programme. What is their programme? Hate Douglas because he is there too long; He talk too much, he is too bombastic, all kinds of things Hate Douglas! That is the programme of the Opposition. I pray for them because I know that he who God has already blessed, no man can ever curse,” said the Prime Minister.