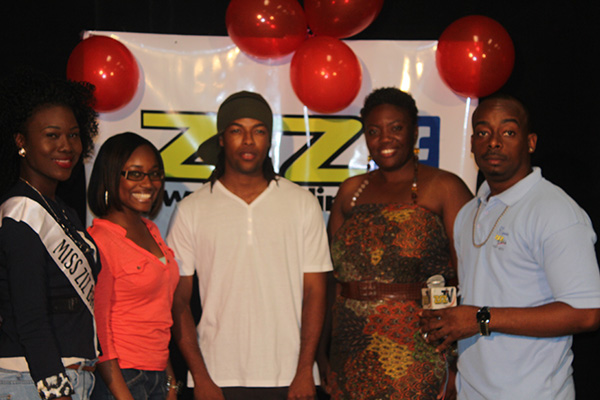 (ZIZ)– Valentine’s Day got a whole lot better for three persons who won big in the first ever, ZIZ Expressions of Love Competition.

The three winners were announced and awarded during a brief ceremony at ZIZ Studios Thursday afternoon.

The overall winner was the popular local soca artist, Nickhail Rogers. He received a weekend getaway at the luxurious Silver Reef.

He says he is hoping ZIZ will keep this competition going in the future.

“Am proud to say I have won it. This is the first time I heard about it. I saw it on Facebook and I decided to take a chance and put in a song that I wrote a couple of years ago and surprise, surprise I won. Hopefully you (ZIZ) could make it even bigger because this is a nice gift — a weekend at Silver Reef. So definitely I am looking forward for it next year,” he said.

The second place prize of a dinner for two at Copper Chimney went to Ms Janelle Irish, who told ZIZ that she really wanted an avenue like this where her poetry can be ranked against others.

Valencia Kelly was the third place winner in the competition and received a gift set from Ashbury’s. She commended ZIZ for initiating this unique competition.

“When I heard it first on radio, I just jumped at the opportunity and perhaps a few days later I just got on my computer and started writing. I am a poet, I’ve been writing now for years and so love poems especially, they’ve been one of my favourites so I just started and it flowed from there.”

To be eligible, interested persons were asked to write a poem and send it to ZIZ for a chance to be the big winner of the ZIZ Expression of Love Competition.