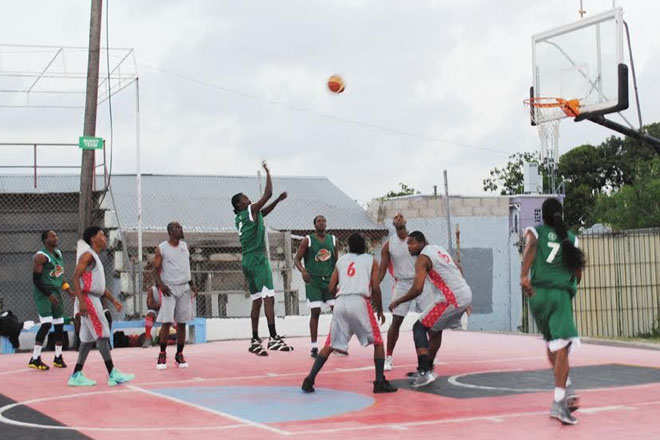 The game, which was refereed by Romel Tobias and Greyson Richardson, had all the signs of being a one-sided affair with Development Bank Challengers Exodus having a full slate of its players with the return of Ridelle Marshall after a long injury layoff and Shawn Forbes who missed their last encounter due to a shoulder injury.

The defending champion, who also enjoyed the services of Alex Thomas and newcomer Jules Williams, drew the first blood with a two pointer. However, PJ’S quickly reduced the deficit through a solitary penalty point, and seconds later they scored their first two points and for a brief moment, they led 3-2.

The defending champions shortly turned on the heat and by the end of the first half they were comfortably leading 46-26. In the course of the third quarter Development Bank Challengers Exodus were leading 70-35 which was twice as many points as their worthy opponents, but at the end of the quarter, PJ’S had added two points for the score to read 70-37 against them.

Scoring for Development Bank Challengers Exodus were Taslyn Hodge who returned 19 points, four rebounds, three assists and one steal; Javier Sutton with 16 points, eight rebounds, four assists and two steals; and Delvin Marshall who had 15 points, five rebounds, one assist and one steal.

The two teams will meet on Saturday August 1, at the Grell Hull-Stevens Netball Complex in Stoney Grove, Nevis, for the second of a best of three games in this playoff.

The second game of the evening which was played at the New Town hard courts saw second seed SOL Fig Tree Dirt Revellers scrape through 74-70 in extra time after another of the Nevis teams, seventh seed Cotton Ground Rebels held a slim lead most of the way but ended up tied 65-65 at the end of regulation time.

The visitors, Cotton Ground Rebels, had as their top scorers: Donford Wilkinson (21 points, one rebound, 3 assists, 3 steals, and 2 blocks), Jenerson France (13 points, 8 rebounds, 2 assists, one steal and one block), and Roydon Browne (11 points, 15 rebounds, one assist, 4 steals, and one block).

The other seeds after the regular season are number three, Bucks; number four, St. Paul’s Tuff Knots; number 5, Cayon Lions; and number 6, Hitters. Not taking part in the playoffs, having fallen by the wayside are seed number 9, Wolf Pack and seed number 10, Legends.