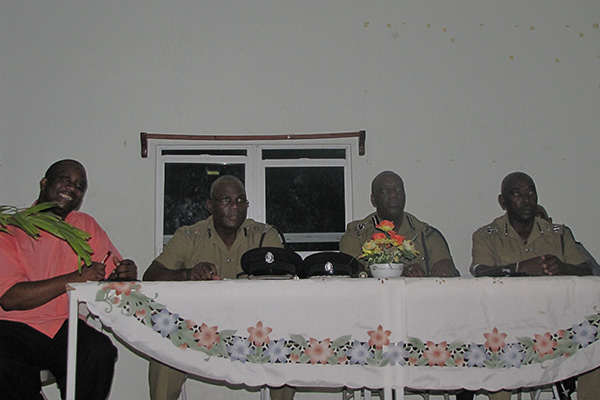 (ZIZ) — On Tuesday 26 November 2013 at 5:30 pm, the Royal St. Christopher and Nevis Police Force held a Town Hall Meeting at the St. Paul Community Centre which was geared towards building a better relationship between the police and the community it serve.

The meeting was chaired by Mr. Terry Morris and the prayer was given by Father Daniel of the Anglican Church.

Commissioner C.G. Walwyn addressed a number of issues and spoke to the audience about crime in their community. He answered question and addressed concerns of members of the audience. During his presentation Commissioner CG Walwyn thanked everyone for attending the Town Hall Meeting which is geared to help make their community safer. He encouraged persons to call the police when they see crime occur, and also, Crime Stoppers at 1-800-8477 (TIPS), and reminded them that the police cannot solve crime by themselves; they can patrol everyday and investigate crimes, but, unless the police received information from members of he community, it will only be another unsolved crime.

Commissioner CG Walwyn said, “We all have some ideas as to who commits these crimes, they may be our relatives or our friends and it is up to us as a community to come forward and help the police reduce crime in the area. The community of St. Paul Village security is especially important because the Prime Minister Honourable Dr. Denzil L. Douglas lives here”.

Commissioner C.G. Walwyn also stressed the importance of cutting grass and bushes around homes and properties, and indicated that this gives crooks a place to hide. He explained a method used to deter crime, known as CPTED which stands for Crime Prevention Through Environmental Design. The Commissioner told the gathering that one person who is a resident of Cayon who had previous heard him spoke about the same theory did what was mentioned him and was able prevent a serious crime from taking place and it resulted in the perpetrator being arrested and charged.

Some of the residents gave high praise to the district police and even asked for an enhancement in the type of vehicle that services the district due to the challenges that the current vehicle faces in manoeuvring the terrain to police the new addition to the area; Kittitian Hills.

Addresses were also made by Assistant Commissioner, Mr. Mirelees Dolphin, Superintendent, Mr. Terrence James, Inspector, Mr. Lyndon David, and Sergeant, Mr Joseph Wyatt. Superintendent James in  is response to some of the issues and questions assured the persons concerned that he will be addressing them and provide feedback.

Commissioner CG Walwyn termed the meeting a success and encourage the wider community to participate in the meetings as they are held in their areas because this is just one of the many ways in which the police and community interaction in finding solutions to various concerns and issues.