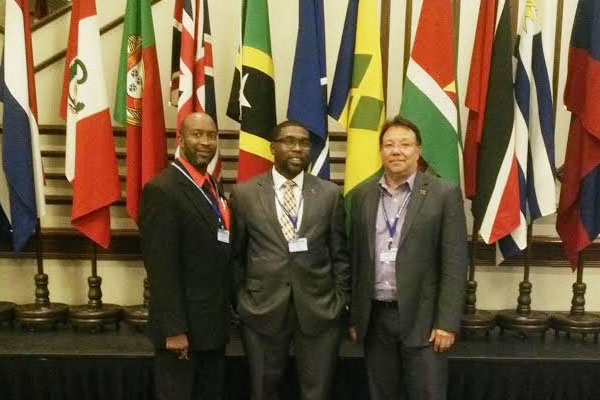 Mr O’Flaherty made the remarks upon return from Lima, Peru, where he attended International Labour Organisation’s (ILO) 18th American Region Meeting that was held October 13-16, where the Federation was represented by a strong tripartite delegation representing the workers, employers, and government.

Representing the workers was Mr Joseph O’Flaherty, representing the employers was Mr Mark Wilkin of the Chamber of Industry and Commerce, while representing the Government was the Attorney General the Hon Jason Hamilton, in place of the Federal Minister with responsibility for Labour the Hon Patrice Nisbett, who had prior engagements elsewhere.

“From the Federation it was a labour tripartite delegation meaning all the three parties must be presented at these meetings,” observed Mr O’Flaherty. “Our tripartite relations in SKN work with the facilitating assistance of the ILO sub regional office in Trinidad headed by Dr Giovanni di Cola and the ILO Workers’ Representative Specialist Ms Paula Robinson.”

The meeting in Lima, Peru, brought together over 450 delegates from the Americas, including labour ministers, government officials and leaders of trade unions and employers organisations from Latin America, Caribbean, Canada and the United States.

According to Mr O’Flaherty, there were fruitful discussions which focused on a wide range of issues including informality, youth employment, social security, labour rights, the promotion of sustainable enterprises, and social dialogue.

“At this meeting we discussed several topics,” explained Mr O’Flaherty. “We discussed the report from ILO’s Director General Mr Guy Ryder, and from that report we had other discussions. The folks in the Caribbean, we had on the first day a discussion concerning decent work, sustainable development, and climate change.”

On the first day of the meeting, Monday October 13, at a special meeting convened for the Caribbean sub region, Mr O’Flaherty shared with his counterparts a paper ‘Toward an Integrative Approach to Sustainable Development, Climate Change and Decent Work Agenda – The St. Kitts-Nevis Perspective and Experience’.

Other discussions included the whole focus of multinational corporations and getting the ILO to assist the member nations, particularly in Latin America, to help them to get these multinational organisations to respect the local labour laws, as well as laws from their originating countries, especially in areas of occupational safety and health.

“They tend to be good on occupational safety and health, but they will disregard other laws such as the rights for unions and the rights for workers to be unionised,” noted Mr O’Flaherty. “They disregard things like collective bargaining process – they just run over those sort of things.”

However, comparing what he observed and learnt about the conditions of the workers in Latin America, Mr O’Flaherty commented that the people in St. Kitts and Nevis and the Caribbean sub region as a whole have benefitted from years ofunion representation that have been pushing the various union agendas on behalf of the workers.

“To me, it seems as if that we are actually ahead of a lot of the Latin American countries in terms of what we have achieved and the practises that are now common place, such as the collective bargaining processes that we are all familiar with in terms of the trade unions throughout the Caribbean,” pointed out Mr O’Flaherty.

The President of St. Kitts and Nevis Trades and Labour Union observed that the right for workers to have social security benefits, was another area he felt that workers in the Caribbean and the Federation in particular have benefitted immensely because some workers in Latin America do not have that right, or they do not know about the right of social security.

“We also had some of the Latin American countries that have major problems with child labour, worst forms of child labour, treatment of women and that sort of thing,” commented Mr O’Flaherty. “We had various discussions on all these topics throughout the four days of the meeting.

“The president of Peru, His Excellency OllantaHumala, gave a speech where he said he dedicated his administration towards the drastic reduction of child labour, and the worst forms of child labour and he gave the statistics of the 1.5 million cases of child labour in his country. That was shocking and alarming.”

While the population of the Caribbean is small compared to that of Latin America, Mr O’Flaherty said that those in the Caribbean were able to show all the things they would have achieved on behalf of the workers, saying that they find themselves as a kind of example to Latin America.

He hoped that by participating in the ILO meeting that they will be able to get some assistance “in order to push our decent work agenda country programmes from the ILO, because we are here and so that assistance will go a long way in terms of helping trade unions in their work.”

As for chambers and the various employer organisation and enterprises, it was hoped that the ILO wouldbe helping them as they pursuetheir rights to private properties, and the right to have a sustainable enterprise.

“All these things, we seek assistance guidance and financial support from the ILO towards institutional strengthening and the continuation of pushing our social agendas relating to decent work and trade unionism,” explained Mr O’Flaherty.