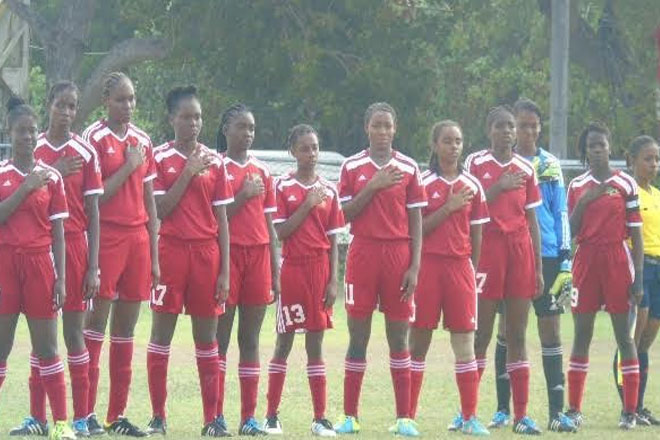 Trinidad and Tobago and St. Kitts-Nevis make it 2 and 0

Sports Page — The action continued in the FIFA under seventeen women’s world cup qualifiers at the ET Willet Park in Nevis, on Tuesday 25th August.

The two matches previously scheduled for Monday 24th August, were duly postponed due to the expected passage of Tropical Storm Danny.

Match one kicked off promptly at 9.30 am when Trinidad and Tobago engaged the BVI.

The massacre stared as early as the 19th minute when T&T’s Kaydeen Jack placed a right booter into the back of the net.

That opened the floodgates as no less than seven more goals were secured by the Trinidad and Tobago team:

Add to that Ranae Ward in the 44th minute; Kaydeen Jack in the 66th minute; Laurelle Theodore in the 88th minute and in the minute of extra time awarded by the Referee, Kelsey Henry put the icing on the cake with her conversion in the 91st minute.

Make that 8 goals to nil in favour of Trinidad and Tobago-as comprehensive a margin as you could get.

In match number two, a crucial encounter for Dominica and hosts St.Kitts and Nevis, both teams started off tentatively after the 3.30 pm start.

However, it was Dominica applying most of the pressure right throughout the first half and the St. Kitts-Nevis offense looked somewhat sluggish, even though Kavisha Robin was a dynamo in defense and saved her team some early embarrassment.

There were no fewer than two occasions when the ball was kicked by the Dominica offense and shaved the upright, with the goal keeper left flat footed.

However, late in the second half, urged on by the coaching staff, the St.Kitts-Nevis offence seemed to have been awakened from their slumber and the tables were turned.

Suddenly it was the Nature Isle girls who were under severe pressure and in the 68th minute Zhane Phillip capitalized on a slight fumble by the Dominican goalie and slammed the ball home, much to the excitement of the very supportive home crowd.

One goal to nil in favour of the home team and despite the best efforts of the Dominican girls at the death, they failed to equalize when the final whistle was blown.

A bumper crowd is expected on the final night of competition.