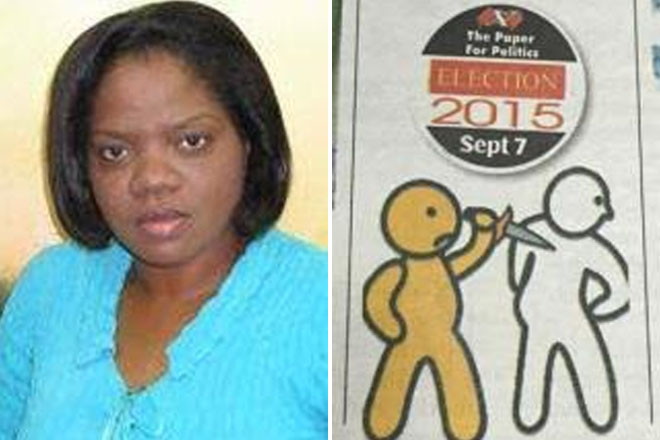 At 10 pm three young men came asking at door for another relative, a 41-year-old farmer, shouting loudly and attempting to break down door. With the family insisting that he was not there, the elderly aunt who went to lock the front door was overpowered and the men gained entry.

Brandishing a gun and announcing a hold up, they ransacked the place, beat Braveboy’s elderly aunt about the face and body before escaping with a gold chain and over $1,000 in cash.

Noted for her outspoken criticism of the opposition People’s National Movement (PNM) politicians and its media mouthpiece, the Trinidad Express, Braveboy has come under attack in Express articles and on social media in recent months from fellow journalists pursuing a political agenda.

Such attacks on Braveboy have become increasingly personal and pointed, culminating on Tuesday with a graphic published by the Trinidad Express depicting a violent attack in conjunction with a piece on Braveboy.

“Knowing that more than one journalist at CCN [Caribbean Communications Network – owners of the Express newspaper] had or still has criminal charges pending (and a couple of others who can still be charged with criminal offences), knowing that Marcia Braveboy has been exposing and hurting that media house… It is not farfetched that this media house and a certain politician with criminal connections may have had a hand in this. I’m not joking,” said one local commentator.

Braveboy’s sister Rachel, who is due to return to Grenada on June 23, now says she wants to shorten her stay.

Ken Ali, the CEO of Caribbean New Media Group (CNMG), the broadcaster of Braveboy’s talk show, called her on Wednesday to say he was sorry about the ordeal her family had been through.

The incident has been reported to the police.