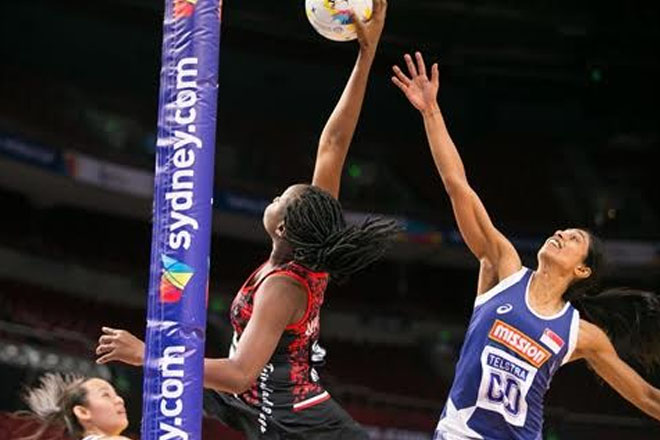 Sports Page — Trinidad & Tobago have notched up their fourth straight win against Singapore this morning, with a 75-32 Qualifying Match victory at Allphones Arena.

Singapore came into the match with one victory over Sri Lanka on Day 1 and was unable to challenge the ninth-ranked Calypso Girls, errors proving costly for Singapore as the Calypso Girls ran out winners 43-goal winners.

Coach Ruth Aitken for Singapore said the difference in world rankings was clear today “Trinidad [& Tobago] are obviously a very athletic team and we struggled to deal with that as well as we would have liked to, I think it showed the difference in world rankings at the moment but I was really pleased my girls kept going, we put all of our squad out there.”

From the outset, Trinidad & Tobago was able to stamp their authority on the game and displayed tough defensive pressure right across the court with all but two of players offering up deflections in the first quarter.

Trinidad & Tobago made wholesale changes at the start of the second half, while Singapore brought on Olivia Flanagan at wing defence, Pamela Liew at goal attack and re-introduced tall defender Li Chen at keeper. Kalifa McCollin who started the second half at goal attack for Trinidad & Tobago had an impressive third quarter shooting 15/15, and missing just one goal for the match as the side continued to dominate all areas of the court, Calypso Girls leading 58-24 at three-quarter time.

Mei Ling Yu was substituted into goal shooter for the injured Soh during the fourth quarter for Singapore as Trindad & Tobago continued to impress the crowd with their athletic flair and style of play, running out eventual winners 75-32.

Trinidad & Tobago will meet Samoa next as the Calypso Girls’ McCollin shared her thoughts on the match “I think that Samoa is a little bit more physical than the other team so from the start we need to be physical with them and get the game going.”

Meanwhile, In a polished performance Australia proved too strong for improving netball-nation South Africa, running out 66-31 victors in their Day 6 clash at Allphones Arena tonight.

The Diamonds came out firing in the first quarter piling on 23 goals to South Africa’s five. With many starting seven players rested the new-look Australian line-up out classed South Africa in every position.

The second quarter was a less one-sided affair with South Africa starting to find their rhythm and get some goals on the board.

Diamonds defender Sharni Layton appeared to be ‘back at home’ in goal keeper, a position she dominated in the first half ensuring Proteas goal shooter Lenize Potgieter was kept from scoring. Animated on court, Layton accrued some impress stats; 5 intercepts, 4 rebounds and 2 deflections and that was just at half time.

The Australian attacking end also dominated with Erin Bell a shining light up forward, sitting at 94% (18/19) at half time, helping the Australian take a 38-12 lead into half-time.