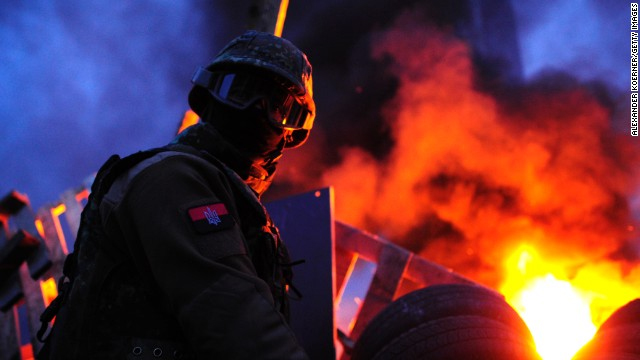 Truce crumbles amid gunfire in Ukraine, at least 20 dead

Kiev, Ukraine (CNN) — A shaky truce crumbled in Kiev Thursday morning, when gunfire erupted at the city’s Maidan, or Independence Square, which has been ground zero for anti-government protesters.

It’s unclear what prompted the gunfire. But CNN crews at the scene reported that as security forces were moving away from the area, a group of protesters pursued them, throwing rocks and Molotov cocktails.

When the bullets flew, several demonstrators fell to the ground.

Protesters grabbed the wounded by their clothes or limbs, and carried many of them to a hotel lobby at one end of the square that had been converted into a triage center.

Bodies, covered in bloodied sheets, lay on the floor. Orthodox priests prayed over them.

Medical workers had no chance to save many of those who died, said Olga Bogomolets, a doctor.

“They were shot directly to their hearts, their brain and to their neck,” she said.

As police hastened their withdrawal, demonstrators rushed to fortify their barricades, which they then reignited.

The tent city was once again in their hands.

No one wanted a repeat of Tuesday, when 28 people died — police and protesters alike.

It was the deadliest day of the protests, which began in November when Yanukovych reversed a decision to sign a trade deal with the European Union and instead turned toward Russia.

That dissatisfaction has since morphed into resentment of Yanukovych, his closeness to Russia, and the power he wields.

The violence caused political fallout in the President’s own party and elsewhere.

Kiev Mayor Volodymyr Makeenko announced his resignation from office and the country’s ruling party, according to the city administration website. The same post also announced that the city’s metro transit system is reopening.

Opposition leader Vitali Klitschko, a former world-class boxer, met with Yanukovych Wednesday — discussions that led to the truce. He was expected to sit down with the President Thursday as well, but after the latest violence and deaths, it’s not clear if the meeting will still take place.

Foreign ministers from Germany, France and Poland were meeting with Yanukovych at midday Thursday, according to Ukrainian and German media reports. Later in the day, European foreign ministers are scheduled to hold an emergency meeting in Brussels on the situation in Ukraine.

Wednesday, the countries had spoken about the possibility of sanctions against Ukraine’s government.

“The ongoing attempts to obtrusively intervene from outside, threat with sanctions or trying to influence the situation in any other ways are inappropriate and can’t lead to anything good but can only aggravate the confrontation,” the report quoted spokesman Aleksandr Lukashevich.

Senior officials in U.S. President Barack Obama’s administration told CNN Wednesday they were bracing for Ukraine to intensify its crackdown under pressure from Russia.

“Things have gotten very bad,” one official said. “The government is speaking in very nasty, aggressive and confrontational terms. It signals they are prepared to do something.”

But analysts warned there was little that outside pressure could do, especially if the Ukrainian military gets involved on the side of the government cracking down on protesters.

“My own hunch,” said Council on Foreign Relations President Richard Haass, “is this is going to continue to escalate.”