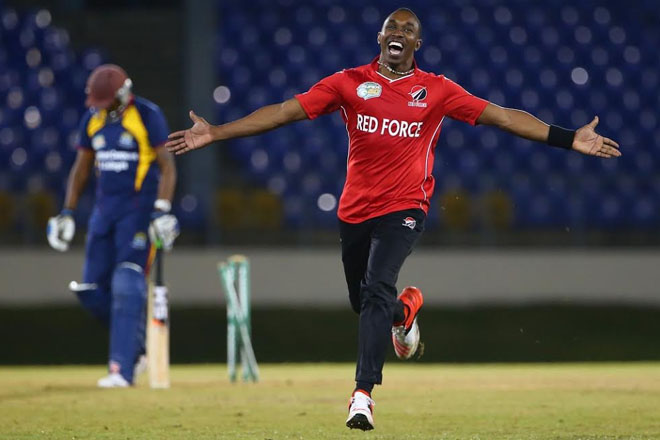 The 31-year-old, who is from Santa Cruz, is a world class all-round cricketer whose talent is sought after by cricket franchises in the T20 format all around the world where his exuberant style of play has characterised Trinidad and Tobago cricket.

Earlier this year Bravo led T&T’s Red Steel cricket team to victory in the Caribbean Premier League (CPL) regional T20 tournament from last place, to lift the championship crown in the semi-final play-offs and final in front of his home crowd at the Queen’s Park Oval in Port-of-Spain.

On Monday, president of the T&TCB Azim Bassarath said that the national honour given to Bravo is well-deserved and will help to motivate other young cricketers to work hard and establish themselves much like he has done over the years.

Bassarath said Bravo’s talent and drive for success was noted since he was a youngster having represented T&T at cricket at the Under-15 and Under-19 levels before playing for the senior national team and eventually being elevated to captain.

The local cricket chief said that Bravo’s leadership qualities and vital contribution to the team with both bat and ball, was also highlighted by his spectacular fielding which did not go unnoticed by the regional selectors.

“It was just a matter of time before he was handed the captain’s armband for the West Indies 50-Overs team, and was one of three T&T captains of West Indies teams which also included Denesh Ramdin (Test) and Merissa Aguilleria (Women), all in one calendar year,” said Bassarath.

The T&TCB president also paid tribute to Bravo’s multi-talented persona as an entertaining performing artiste, having recently recorded a cross-over Chutney hit with Nisha Bissambhar which was launched both in T&T and in India and adopted by the Chennai Super Kings for which he plays in the Indian Premier League. He also has signed a recording contract with a Los Angeles, USA-based label.

Bravo also has a long-standing relationship with Jamaican dance hall music artiste Beenie Man with whom he has performed and whom he credits for encouraging him to further his latent musical talent.

Bassarath also took the opportunity on Monday to extend on behalf of the T&TCB, warmest congratulations to the National Association of Athletic Administration (NAAA) and the national men’s 4X400 metres, and women’s 4X100 metres relay teams which earned silver and bronze medals respectively at the IAAF World Athletic Champions which ended on Sunday in Beijing, China.

The T&T quartet of Renny Quow, La Londe Gordon, Dion Lendore and Machel Cedenio pulled out all the stops in the iconic Bird’s Nest Stadium on a rainy night to grab silver behind the USA in a new national record.

Bassarath said he was thrilled on hearing the comments of Gordon who said after the race that the team was motivated by the expectation of the T&T public which pushed them to their best performance yet.

“It was a commitment and focus that produced a world class performance in difficult conditions which showed that these young men are conscious of their responsibilities to the public of T&T who have invested much in them, which they have repaid big time,” Bassarath.

The leading cricket administrator noted that it was the first time that the women were medalling in the relay event at the games and their team of Kelly Ann Baptiste, Michelle Lee Ahye, Reyare Thomas and Seemoy Hackett deserves the best commendations for their exceptional effort, bettered only by the USA and Jamaica.