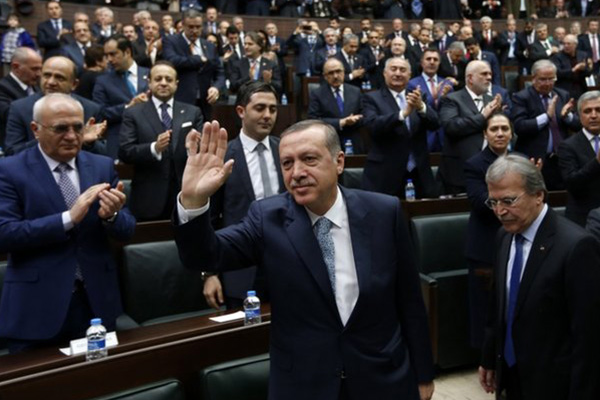 (BBC) — Turkish PM Recep Tayyip Erdogan has angrily condemned as fabricated an audio recording that appears to show him talking to his son about hiding large sums of money.

He said the recording, allegedly tapped and posted on social media, was a “treacherous attack”.

It appears to reveal Mr Erdogan asking his son Bilal to dispose of millions of euros in cash from a house.

The opposition has called for the prime minister’s resignation.

The recordings, which could not be independently verified, were said to be of four conversations dating back to 17 December, when the sons of three ministers and business allies of the prime minister were detained in a high-level corruption investigation.

Correspondents say that the inquiry has presented a major challenge to Mr Erdogan’s 11 years in power ahead of key local elections in March.

Cagil Kasapoglu from BBC Turkish says that, interestingly, neither the prime minister nor his party’s spokespeople have denied that the voices on the recording belong to Erdogan and his son.

Their statement so far is that their voices were “montaged” to implicate them, our correspondent says.

During the conversation, a voice can be heard discussing how to reduce the funds to “zero” by distributing them among several businessmen.

Mr Erdogan’s office issued a statement late on Monday night saying the release of the recordings was part of a sustained campaign to unseat him.

“Those who created this dirty conspiracy targeting the prime minister of the Republic of Turkey will be brought to account within the law,” it said.

Mr Erdogan had a late-night meeting with the head of intelligence and then spoke out publicly on Tuesday, telling MPs from his AK Party the recording was a “shameless montage” and an attack on him personally.

“We will bring legal action against these [wire-tapping] activities. If we let it go on, there will be no privacy for families, nor for the state in this country,” he said.

By late Tuesday morning, the recording had received more than 1.5 million hits on YouTube in less than 24 hours.

The previous day, Turkish government officials said thousands of people, including senior politicians and other leading figures, had had their telephones illegally tapped over three years with the aim to blackmail and fabricate criminal cases.

Two pro-government newspapers, Yeni Safak and Star, alleged that the taps were ordered by prosecutors said to be loyal to US-based cleric Fethullah Gulen. The prosecutors have denied the accusations.

Mr Erdogan has accused Mr Gulen, his former ally, of orchestrating December’s corruption investigation against key AKP figures and of trying to form “a parallel state” in Turkey.

One of the prosecutors named in the stories, Adem Ozcan, denied the allegations.

“There was definitely no monitoring or phone-tapping of thousands of politicians, writers, NGO representatives and businessmen in the framework of this dossier in the way that the newspaper stories say,” he said in a statement.

A spokesman for the main opposition Republican People’s Party (CHP) said Turkey could not continue on its path “with this dirt” and said the prime minister should step down.

Hundreds of protesters, mainly students, protested in Ankara on Tuesday, calling on the government to resign, Reuters news agency reports. They were dispersed by riot police with tear gas and water cannon.