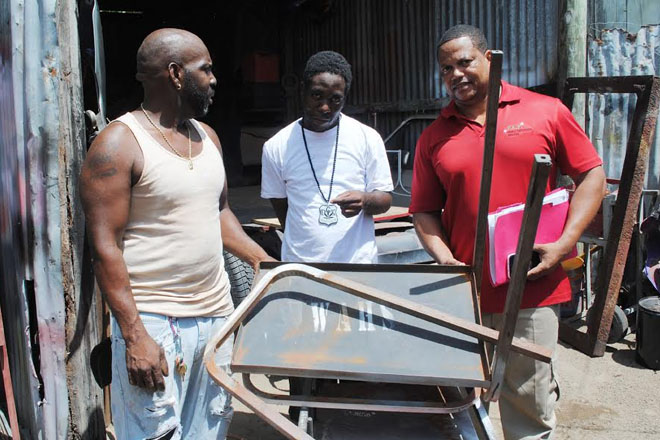 Basseterre, St. Kitts — Primary and high schools around the island of St. Kitts are the direct beneficiaries of an ingenious agenda, which was initiated by a local businessman and supported by the People Employment Programme (PEP), that is saving Government a tidy sum of money.

Mr Jason Nicholls Browne, proprietor of Glossie Auto Body and Restoration Workshop on Westbourne Street in Basseterre would have seen a lot of old desks being discarded and he felt that the country was wasting a lot of money when new ones would have been bought, yet the old ones could be refurbished.

After the People Employment Programme (PEP) was set up, he approached them in 2013 with a proposal that he could refurbish the desks while at the same time train PEP participants to do the job.

The idea was accepted and the first batch of 135 discarded desks were collected from schools and refurbished. Among the schools that benefitted from the first batch was the Basseterre High School, where Principal, Mrs Carlene Henry-Morton said that the job done on the desks was quite good, adding: “They were so well refurbished, they looked like new furniture.”

Five PEP participants were attached to Glossie Auto Body and Restoration Workshop to train under Mr Browne, while PEP Field Officer, Mr Jason McKoy made it his duty that when he went to schools that he would also look out for, and make arrangement for the pick-up of the discarded desks and have them sent to Westbourne Street for refurbishing.

“I go around the schools collecting time sheets for PEP workers in the different schools for them to get paid their salaries,” explained Mr McKoy. “While there I inquire to find out if there are any desks that would have been discarded and when they are shown to me I make arrangements for them to be taken to Glossie.”

Mr McKoy said that the desk refurbishment programme has become quite popular because when the refurbished desks are taken back to the schools, they are highly appreciated as they are much sturdier in comparison with the new plastic-based furniture which is prone to breakage and which is not easily refurbished.

PEP workers at Glossie Auto Body and Restoration Workshop are now down to four, after one of them would have left to go and work elsewhere following the training that he received. Those still on the job have learnt the skills passed on to them, and when asked they say that they could run such a business anywhere.

Both Mr McKoy, the PEP Field Officer, and Mr Browne, the proprietor, feel that while the trainees are now capable of being certified, they could do better in practical work. According to Mr Browne, the four PEP workers could easily be weaned off PEP if he could be given a contract to be refurbishing desks from schools and that way they could be fully employed.

Mr Browne noted that doing the job has not been easy, especially the sanding part of it, but with the assistance of PEP they now have a compressor and blasting machine and that way they are able to work on desks at any given time. The trainees are now used to the job and the equipment and he feels at ease leaving them running the show.

“In a way forward Mr Browne here still has desks, there is a number of small material the he needs to complete them,” explained Mr McKoy on a recent visit at the Westbourne Street workshop. “It is our plan that he refurbishes a minimum of 25 desks every month that would be sent to the schools. He says that he can produce more, but I would rather we stick to 25 so as not compromise the already high standard that we have set.”