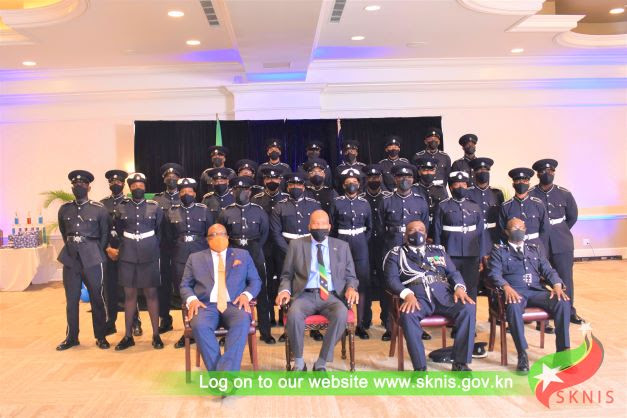 Basseterre, St. Kitts, December 23, 2021 (SKNIS): Twenty-six men and women graduated from the Police Training School on Wednesday, December 22, 2021, officially signaling the start of their careers as members of the Royal St. Christopher and Nevis Police Force.

The graduation ceremony was held at the St. Kitts Marriott Resort. It was attended by Governor-General His Excellency Sir S. W. Tapley Seaton, Prime Minister and Minister of National Security, Dr. the Honourable Timothy Harris, the Governor-General’s Deputy, Mr. Michael Morton, and Mrs. Morton, and other senior government officials.

The course ran for six months with the recruits completing various law enforcement subjects, as well as physical training, self-defense, foot, and armed drills, and others. An introduction to Spanish course was included – the first time the teaching of a foreign language formed part of the official training. Having graduated, the recruits are now full-fledged police officers.

Commissioner of Police, Hilroy Brandy, told the graduates of Course #45 that the police force is a service-based profession.

“Do not get carried away by the name of the organization – The Royal St. Christopher and Nevis Police Force. Your primary responsibility is to protect and serve the citizens and residents of this nation,” he said.

Prime Minister Harris echoed similar sentiments and highlighted that the commitment of a police officer extends beyond traditional working hours.
“It is a job where you put the needs and safety of others before yourselves,” Dr. Harris stated. “While others will be running from danger, you will be required to run towards it, to stop it, so that your fellow men, our citizens, our residents, and our visitors, are protected. What a noble cause you have joined.”

A number of awards were presented at the graduation to the outstanding performances.

No. 425 Constable Jeremy Warner was graded as the Best Recruit and Most Consistent. No. 437 Woman Police Tonya Mardenborough earned Best at Police Subjects, Best Results in Final Exams, and Best at Weapon. Best at Pistol Shooting went to No. 434 Willmoht Warner-Mitchel; Best at Rifle Shooting was No. 417 Brandon George; Best at Physical Training was No. 431 Oneil Thomas, and Best at Drills was No. 435 Miguel Hendrickson.

Others graduates earning awards were No. 433 Keisha Davis for Best at Kit and Turn Out, No. 432 Talbert Warner for Best at Self Defence, No. 443 Dequanna Browne for Most Improved, and No. 441 Kenijah Hazel for Most Disciplined.