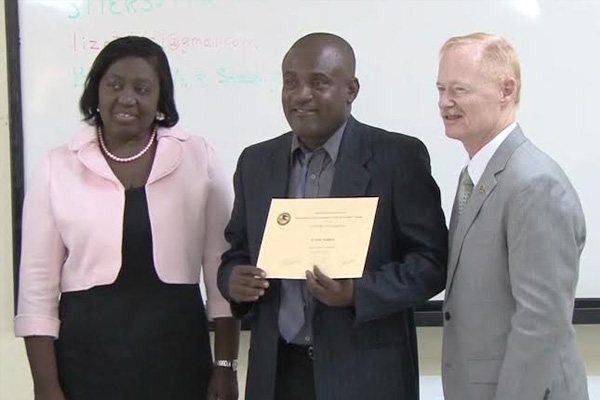 Basseterre, St. Kitts (SKNIS): Officials from the United States have commended authorities in St. Kitts and Nevis for their leadership in enhancing law enforcement operations.

Over the past couple of years, the Royal St. Christopher and Nevis Police Force has upgraded equipment and strengthened networking linkages with regional and international agencies. The significant increase in training opportunities for the rank and file has also been credited within and outside of the organization.

Programme Manager of the International Criminal Investigative Training Assistance Programme (ICITAP) Gary Bennett, gave a thumbs up to the willingness of local officers to embrace new techniques. He made the comments while addressing graduates of an Internal Affairs Investigation Course as well as an Audit and Inspection Course on Thursday (November 13), which was facilitated by two officials provided by the United States Department of Justice.

“The Office of Professional Standards is a programme we put together in the Eastern Caribbean,” he stated. “You represent somewhat of a … pioneer in adapting this in your policing agency. It’s not exactly new; the design however is somewhat new as it combines the traditional internal affairs investigation of misconduct and a more broad approach to looking at your organization.”

Citing the audit and inspection procedures, Bennett stressed that: “The shift, as has been illustrated (during the November 03 to 13 training), goes a bit from the sanction mentality to one [of] let’s go out and find out what’s working and what isn’t and fix what isn’t working and celebrate what is.”

Permanent Secretary in the Anti Crime Unit in the Office of the Prime Minister, Her Excellency Astona Browne said the training covered areas critical to law enforcement and is a component of a larger developmental agenda.

“This government’s approach to law enforcement, safety and security in general is not ad hoc but is part of a well structured strategy that gives priority to the implementation of a plan of action with focus on capacity building, infrastructural development and overall advancement using available technology,” she disclosed. “The [new] security training academy is under construction at Lime Kiln … and will soon be available with modern facilities to accommodate training such as this one.”

Ambassador Browne added that the five year security training plan will improve expertise in new and emerging areas, including cybercrime and forensic investigation.

“We are moving forward on all fronts but you must step up your game as professionals in the service,” she urged. “Use the knowledge and the skills gained to make that shift that will redound to the improved dispensation of service to the public and to the agency as a whole.”