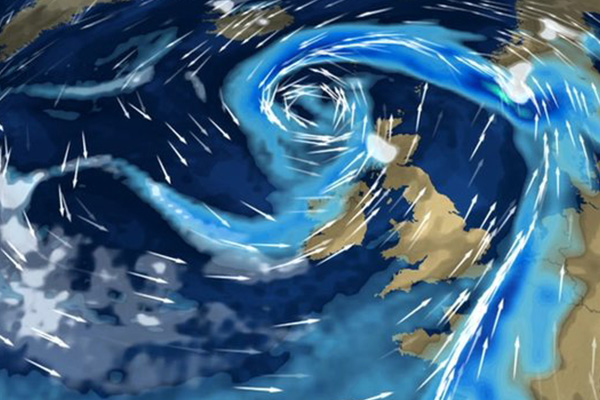 (BBC)—Thousands have their Christmas travel plans disrupted and 150,000 homes are without power as severe weather continues to batter the UK.

Trains have been cancelled, roads flooded and there have been long delays and cancellations at Gatwick Airport.

Southern England has been badly affected but the storm has been heading north, with Northern Ireland, Wales and Scotland now bearing the brunt.

Two people died in storms on Monday – a man in Cumbria and a woman in Gwynedd.

There has been heavy rain in Northern Ireland, with more expected, and winds in Wales have reached 78 mph in Pembrey and 77 mph in Aberdaron.

The strong winds in Scotland could reach up to 90 mph in the west later on Tuesday, forecasters have said.

As many try to travel home for Christmas, there is widespread disruption to rail services:

Tens of thousands of homes are without power, with Kent, Surrey and Sussex worst affected, the Energy Networks Association said. It said there had been “notable collisions” along power lines during the stormy weather.

Prime Minister David Cameron tweeted: “I’m across plans to get electricity to many without power. My thoughts are with them and those facing travel problems this Christmas Eve.”