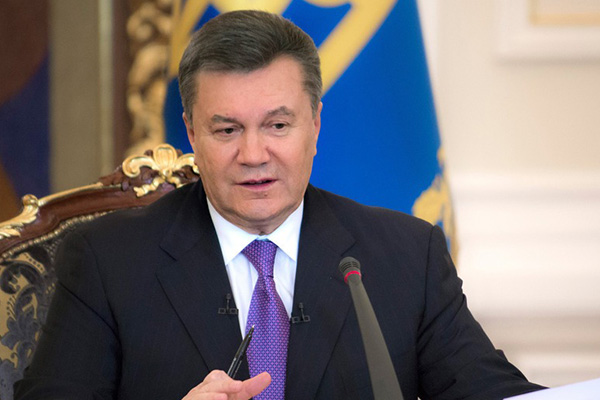 Kiev, Ukraine (CNN) — Authorities in Ukraine have issued an arrest warrant for ousted President Viktor Yanukovych, saying he is wanted for the “mass killings” of civilians.

But arresting him has proved to be tricky, since no one seems to know where Yanukovych is.

Over the weekend, he fled to Kharkiv, a pro-Russian stronghold near the border. And he tried to board a charter plane in the eastern city of Donetsk but was turned away because he didn’t have documents.

But by Monday, his whereabouts — and those of his two top ministers — were unknown, though Yanukovych has said he’s still in charge.

This was just one of many dizzying developments that have engulfed Ukraine since parliament voted to oust Yanukovych as a concession to relentless protests that led to the deadliest violence in the country since its independence 22 years ago.

For now, parliament Speaker Oleksandr Turchinov will take over Yanukovych’s duties. He is a longtime ally of opposition leader Yulia Tymoshenko.

He has promised a new interim government by Tuesday, and new elections in May.

But several challenges await, most notably how Russia will react.

It was Yanukovych’s decision to scrap a European Union trade deal in favor of one with Russia that prompted the protests in November.

Now, the country’s new leaders have made clear that Kiev’s return to European integration will be a priority. But in doing so, they risk losing the largess that the Kremlin had bestowed on Yanukovych.

Taking no chances, interim Finance Minister Yury Kolobov proposed Monday that an international donor conference be held in the next two weeks. Ukraine, he said, will need $35 billion in foreign assistance by the end of 2015.

Yanukovych has traditionally looked upon eastern Ukraine, near Russia, as his traditional support base. Russian is the predominant language.

People in the east are suspicious of the Europe-leaning views of those in western Ukraine, who were at the heart of the protests against Yanukovych that filled central Kiev for months.

The big question: How will Russian President Vladimir Putin respond? He’s been Yanukovych’s chief ally, and Ukraine is in his backyard. Will he act militarily?

The U.S. has expressed support for the action of parliament. U.S. Secretary of State John Kerry spoke with the Russian foreign minister Sunday and asked Russia not to not use military force in the country, according to a senior State Department official.