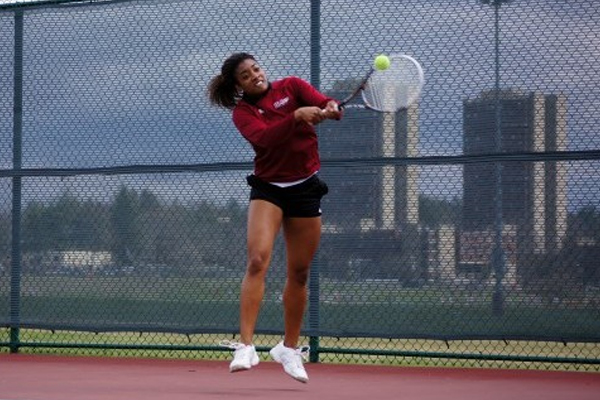 Sports Page — The Massachusetts tennis team recorded its first victory of the spring season in a 7-0 win against Quinnipiac Saturday after falling to instate rival Boston College the previous night.

UMass entered Saturday’s matchup with a strong history against the Bobcats. The Minutewomen haven’t lost to Quinnipiac since April 14, 2003.

This streak continued for UMass, which bested the Bobcats in two of the three doubles matches over the weekend, including another stellar performance from the No. 1 pairing of Ana Yrazusta and Carol Benito. The Minutewomen then carried their success into singles play, sweeping Quinnipiac 6-0.

“(The game) was a very well put together match,” UMass coach Judy Dixon said. “We played strong against Quinnipiac.”

One reason for the Minutewomen’s rebound victory over Quinnipiac was the return of Anna Woolsey. After sitting out Friday’s match against the Eagles, the sophomore finished Saturday with a win in straight sets in singles play, defeating Sydney Young, 6-0 and 6-1.

While all six of UMass’ singles competitors clinched victories in straight sets, Dixon highlighted the performances by Benito and Arielle Griffin following the win.

“(Benito) is a shot in the arm to our team,” Dixon said. “She is tough in singles and doubles and she goes out there and does her job.”

Dixon added that Griffin looked impressive in the Minutewomen’s three matches since returning from the break.

“(Griffin) has come back so prepared and so ready to go,” Dixon said.

Looking forward, Dixon said she believes this year could be a 15-win season for the Minutewomen, who play 17 regular season matches before the Atlantic 10 championship in April. Saturday’s win was UMass’ first of 2015, improving its record to 1-2.

“We are going to be in good shape,” Dixon said. “They believe that and they should believe that.”

Saturday’s win was UMass’ first home game of the season. Coming off last year’s 6-1 record in Amherst, Dixon said that the “unbelievable support from the (home) crowd” serves as extra motivation for the Minutewomen.

This crowd will surely be a factor next weekend when UMass hosts consecutive meets against Army and Marist on Friday and Saturday, respectively.

UMass falls to BC

The Minutewomen faced a tough task Friday, losing to No. 60 Boston College, 4-0 in Dedham.

Already an underdog, UMass faced an additional disadvantage after Aarzoo Malik and Woosely were inactive due to the flu.

Dixon said that heading into the match shorthanded, she wanted to see “some fight, some improvement and some intensity” from the Minutewomen. Although the score wasn’t in their favor, Dixon said they played well given the circumstances.

Friday’s match against the Black Knights starts at 10:30 a.m. UMass will then host the Red Foxes at 12:30 p.m. Saturday.

NB: Arielle Griffin is the daughter of Nevisians Vinette James and Sylvester Griffin