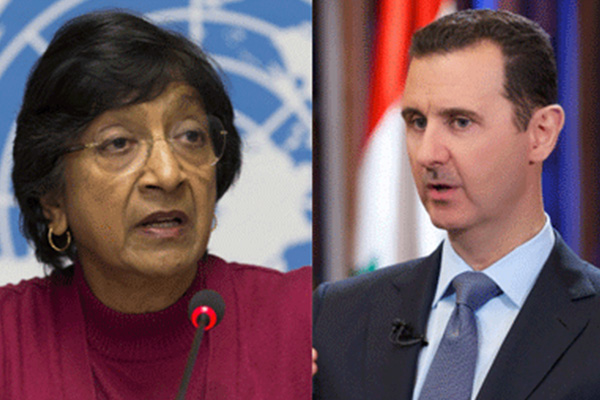 (BBC)–The UN’s human rights chief has said an inquiry has produced evidence that war crimes were authorised in Syria at the “highest level”, including by President Bashar al-Assad.

It is the first time the UN’s human rights office has so directly implicated Mr Assad.

Commissioner Navi Pillay said her office held a list of others implicated by the inquiry.

The UN estimates more than 100,000 people have died in the conflict.

“The scale of viciousness of the abuses being perpetrated by elements on both sides almost defies belief,” she said.

The evidence indicated responsibility “at the highest level of government, including the head of state”, she added.

The inquiry has also previously reported it has evidence that rebel forces in Syria have been guilty of human rights abuses.

However, the investigators have always said the Syrian government appears to be responsible for the majority, and that the systematic nature of the abuse points to government policy.

“She has been talking nonsense for a long time and we don’t listen to her,” he told AP.

Mr Mekdad was in The Hague at a meeting of the Organization for the Prohibition of Chemical Weapons (OPCW) to discuss the effort to destroy Syria’s chemical weapons.

He told the BBC that Syria needed more money and equipment from the international community.

He said Syria needed lorries and armoured vehicles to transport chemicals to prevent “terrorists” attacking the vehicles on their way to the port of Latakia, where they will be loaded onto a US naval vessel for destruction.

An OPCW spokesman at the conference told the BBC that any donations of dual-use equipment would be carefully monitored and there would have to be strict guidelines imposed to make sure the machinery could only be used for the purpose of removing the weapons.