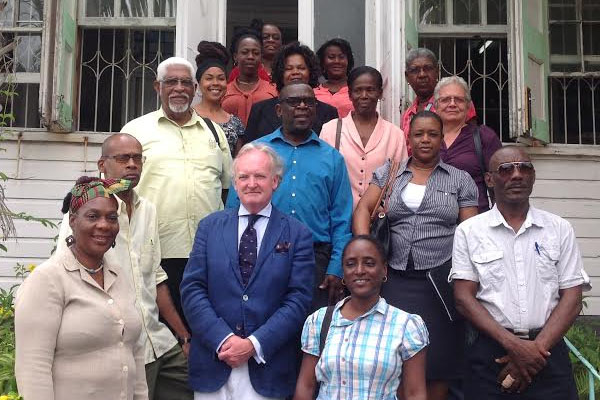 NATCOM (SKN) – An extra-ordinary meeting of the National Commission for UNESCO brought increased insight and perspective into UNESCO activities, in light of recent restructuring, with priority areas being more sharply defined as it streamlines its focus for greater efficiency and effectiveness.

Secretary General of the National Commission For UNESCO Antonio Maynard said he used the opportunity provided by the visit of Permanent Delegate of the Federation of St. Kitts and Nevis to UNESCO, Ambassador David Doyle to support his efforts in clarifying UNESCO’s position and to give members greater insight as they advise stakeholders and formulate plans locally in the future.

It was revealed that the focus areas embraced; Shaping the Post 2015 Millennium Development Goals with special emphasis on the pivotal importance on education, as well as strengthening UNESCO’s participation and comparative advantage in reforming the United Nations Systems through increasing collaborating between UN agencies and “delivering as one” in the different regions where they operate.

It was also stated that based on UNESCO’s Operational Strategy On Youth 2014-2021”, another priority would be the Mainstreaming of Interventions Affecting Youth, with special emphasis on least developing countries (LDCs), Small Island Developing States (SIDS), and the most marginalized social groups.

According to the UNESCO representatives UNESCO was keenly interested in programmes that would contribute to building knowledge societies involving access and capacity building in the use of ICTs and the Internet.

Commenting on UNESCO-related activities earmarked in the work plan for the National Commission for implementation on the ground, Dr. Doyle spoke of the success of these projects, notably submissions for funding under the UNESCO’s Participation Programme and the lobbying efforts in Paris to secure seed funding to launch a marketing exercise associated with the UNESCO-accredited Man & Biosphere site at St. Mary’s in the Cayon area.

He referred to the UNESCO-led “Education for All” as a central objective of the agency and highlighted the recently launched Policy Review of the Federation’s Education Policy by a high-level UNESCO task force from Paris, as well as their intention to develop a sector strategic plan. He added that this would be the first time that an independent assessment of the Federation’s Education Strategy had been conducted.

Insight was given into the Federation’s recent nomination to UNESCO’s Executive Board- the primary UNESCO decision making body–emphasizing that this privilege enabled the Federation to leverage its influence. This Board sets future strategy and policy priorities, discusses the budget and funding allocations.

In conclusion, it was revealed that the Federation is contributing to the Third UN International Conference on Small Island Developing States by way of a committee of SIDS Representatives, originally created by the Ambassador some 8 years ago, with support the support of the Secretary General of the National Commission for UNESCO, Mr. Antonio Maynard.

The Committee raises issues in relation to SIDS at the UNESCO Headquarters in Paris and will push for UNESCO priorities to be highlighted at the Conference, addressing the priority areas such as Climate Change, Technical and Vocational Education and Training (TVET) as well as the Man and the Biosphere (MAB). The Conference will be held in SAMOA (Pacific) from September 1-4, 2014.