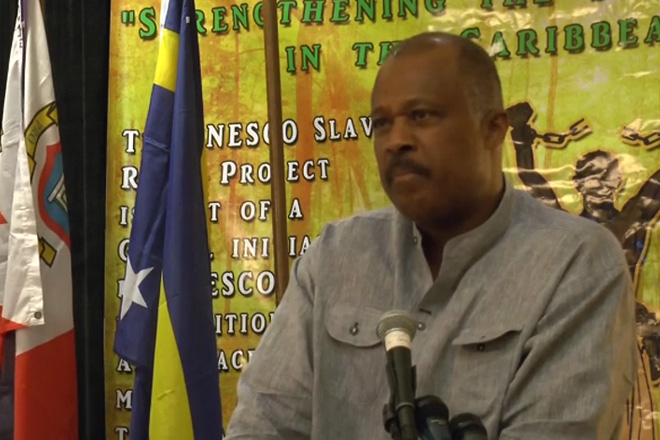 (ZIZ News) The UNESCO Sub-Regional Slave Route Seminar has begun at the St Kitts Marriott, concentrating on reparations for Caribbean people where slavery is concerned.

Professor Sir Hilary Beckles, Vice President for the International Slave Route Project said England began its Caribbean business in St Kitts and Nevis with the island being its first of England’s colonies.

He says England’s imperial business model emerged in the context of piracy and buccaneering, and it was in St Kitts that the model turned to settlement and agriculture. Using the story of the French and British occupation of the island at the same time, as context, he referenced the war that brewed between them for possession of the island.

Sir Beckles said both countries agreed to break away from war for 48 hours to fight their common enemy, the indigenous people. After that was taken care of, the French and British, he said, resumed their war.

“It was one of the first lessons of American history that tells you how the European sees themselves and how they see the rest. These are important lessons to understand the world of global diplomatic affairs. We in the Caribbean this was the incubator of European international diplomacy. These islands were the incubators. Where these principles of diplomacy and global affairs were first seen and settled,” he said.

Sir Beckles stated that we as Caribbean people are back into the mainstream of world politics.

He says for 300 years, the movement of African people around the world to provide cheap disposable labour to global production systems brought us into the stream of world affairs.

“This is why when the British Parliament met to discuss this Crime of Humanity in 2007/8 on the bicentennial of the abolition of their slave trade they determined in the House of Lords and Commons that they could not continue with reparatory justice as a program because the crime was a global crime too large to repair,” he said.

The UNESCO Sub-Regional Slave Route Seminar continued on Tuesday evening with a symposium at the Sir Cecil Jacobs Auditorium that engaged the general public on the topic of “The Fight For Reparations In The Caribbean Sub-Region: Pipe Dream Or Reality?”

The issue of reparations for Caribbean people is being championed by several heads who are in the process of launching a case against the British government.