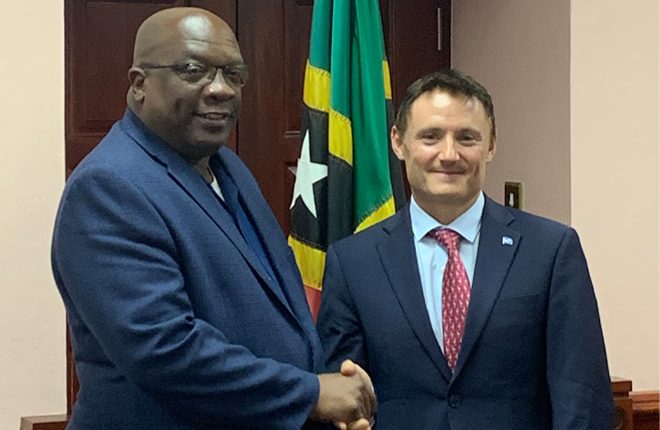 This declaration was made to the Federation on August 9th when Mr. Trebucq presented his credentials, following his appointment to the role of United Nations Resident Coordinator for Barbados and the OECS as of 15 January 2019.

During the courtesy call to the Prime Minister, the UN Resident Coordinator exchanged views on a number of issues including, the role that the UN System plays in bringing balance to the multilateral system and advocating the challenges faced by Small Island Developing States, facilitation of peaceful resolution of crisis through dialogue as well as the need for differential treatment of Caribbean Small Island Developing States in being able to access concessional development finance. Pointing to the Commonwealth Vulnerability Index, the Prime Minister noted that eligibility criterion should consider the vulnerabilities of the Caribbean natural disasters, where recovery is often challenging and lengthy, despite their Gross National Income per capita ratings.

During the discussion with the Prime Minister, Mr. Trebucq commended the government for the significant strides it has made in reducing its national debt – from 101.1% of GDP in 2013 to 58.2% in 2018. He also reiterated the commitments made by the UN Secretary-General, Mr. Antonio Guterres at the recent 40th CARICOM Heads of Government Meeting last July in Saint Lucia, to support their advocacy for improved access to development and climate finance.

The Prime Minister commended the United Nation’s leadership role ensuring that the challenges faced by Small Islanding Developing States and reaffirmed his commitment to strengthening cooperation with the UN Development System under Mr. Trebucq’s leadership.

Leader of the Opposition, The Right Hon. Dr. Denzil Douglas, stated that the Opposition valued the UN’s partnership and contribution in supporting the country with achieving the Sustainable Development Goals.

The 2030 Agenda for Sustainable Development, adopted by all United Nations Member States in 2015, provides a shared blueprint for peace and prosperity for people and the planet, now and into the future. At its heart are the 17 Sustainable Development Goals that call of a urgent global action on: No poverty; zero hunger; good health and well-being; quality education; gender equality; clean water and sanitation; affordable and clean energy; decent work and economic growth; industry, innovation and infrastructure; reduced inequalities; sustainable cities and communities; responsible consumption and production; climate action; life below water; life on land; peace, justice and strong institutions; partnerships for the goals.