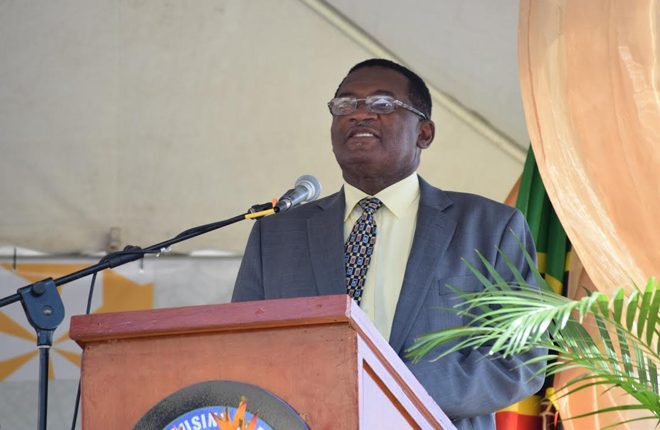 (SKNIS): Government of St. Kitts and Nevis through the National Housing Corporation (NHC) launched its Unity Housing Solution Programme, today (February 17) at Wellington Road, that will fulfil an individual’s need to own a house, said Honorable Eugene Hamilton, Minister of Human Settlement.

“The National Housing Corporation which falls under the Ministry of Human Settlement is mandated by its parent Act to provide housing for the poor and indigent in the federation,” he said. “In carrying out its mandate, the NHC helps to fulfil that fundamental human right in our federation.”

Minister Hamilton said that in pursuance of that important objective, his ministry proposed this project to Cabinet and it has responded by supporting the procurement of a loan from Social Security to construct 300 housing solutions.

“This undertaking that we are embarking upon is an important undertaking and it is one of the important pillars of our Team Unity Government agenda,” he said.

The project will be executed by NHC and preparations have been made for the successful completion of the project within budget.

The minister said that in preparation for this project, a qualified project consultant, Warren Thompson, was recruited.

Minister Hamilton said that his ministry is happy that the designs that will be used will be the Strawberry, Guavaberry and HS 500 option designs. He said that modifications have been done to the size of the bedrooms.

“For example, bedrooms have been increased from a 12×9, which could only hold a small bed, to a 12×12 and in some cases 12×14 that can fit twin beds so that the ordinary poor people of the country will have a much bigger bedroom that can at least hold a dressing table as well,” said the minister.

Notwithstanding the increase in the size of the bedrooms, Mr. Thompson has indicated to the committees involved that he was able to reduce the cost of the houses by about $10,000, said Minister Hamilton.

“As a result of that observation and decision, contractors that were normally contracted with NHC for the sum of $35,000 will get an increase in this project from $35,000 to $42,000 in the first instance and an additional $3,000 available if the gradient requires that you get additional resources, so that a contractor in this project could be contracted up to $45,000,” he said.

The minister said that previous homes were 780 square feet and these new homes will be 862 square feet.

Minister Hamilton said that the homes will be sold at a reduced interest rate.

“The promise is for bigger homes, better homes and smaller payments,” he said. “Smaller payments, which our Cabinet has already approved. At the distribution of the last set of houses, Cabinet approved that the interest rate on the mortgages with NHC will range from a rate as low as 2 percent to as high as 5 percent.”