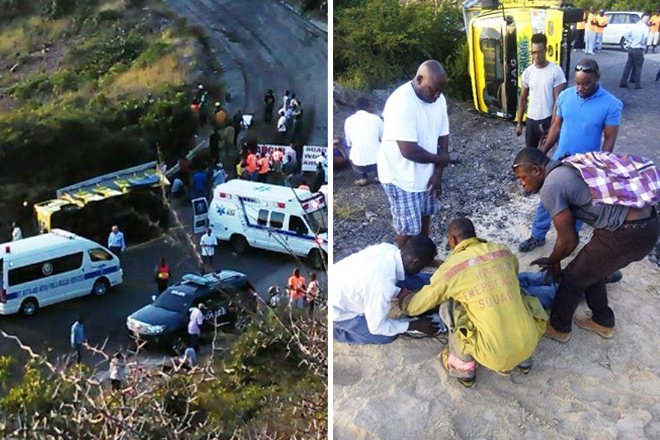 (ZIZ News) — There have been at least six traffic accidents in three days here on St. Kitts and with all that work cut out it is no wonder that calls to Inspector Carl Caines, who heads the Traffic Department, have gone unanswered.

However, we can confirm that at least four vehicular accidents occurred on Monday. At about 5pm, our news team received news of an accident in Lodge involving a tractor but before, at about 2:30pm, our cameras were on the scene in the vicinity of the airport roundabout on the Kim Collins Highway after a Honda car with license plate number PA3546 collided with a yellow Toyota pickup truck with license plate number P3397.

Earlier on Monday, the popular tour bus known as “Big Banana” overturned at Timothy Hill while in Cayon, unconfirmed reports indicate that three vehicles were involved in an accident.

There is still no official word on the extent of injuries sustained in Monday morning’s accidents but unconfirmed reports indicate that several persons were taken to the hospital to treat injuries.

Then on Sunday, an ambulance and a church bus collided in Sandy Point, in the area of the Brimstone Hill Fortress National Park.

The bus is owned by the Evangelistic Faith Church and while the extent of injuries is unclear, we are informed that both drivers were injured. There are unconfirmed reports that one or both drivers received broken bones.

Meantime, it is also being reported that, on Saturday, a motorcycle drove over a cliff in Cayon. ZIZ News understands that that driver is hospitalised. Unconfirmed reports state that he is a resident of Upper Cayon.