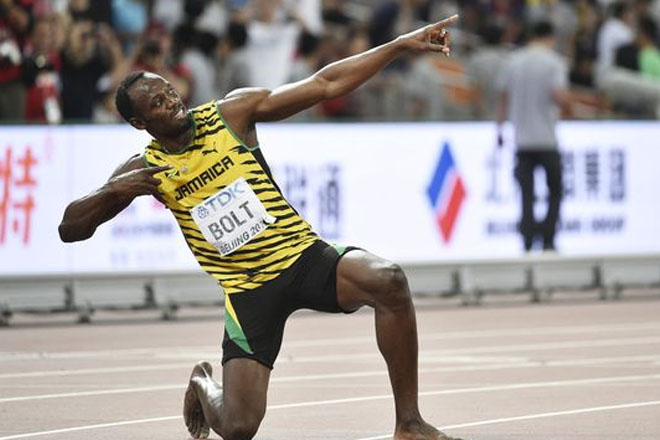 Beijing (AP) — Turns out, only a man on wheels can take down Usain Bolt.

Shortly after the Jamaican great won a fourth 200-meter title and a 10th gold overall at the world championships, a cameraman on a two-wheel vehicle banged into Bolt from behind.

Suddenly, the Olympic champion was down on his back, flipping over before getting back on his feet and then briefly holding his left leg. After regaining his composure, he walked back to the cameraman to make sure he was OK, too.

The unrivaled Jamaican outran Justin Gatlin again on Thursday in another sprint showdown. After bursting through the bend and powering down the finishing straight with no one close, Bolt had time to look left for Gatlin’s red jersey. With nothing in sight, Bolt lifted both arms and punched his thumbs into his chest to show once again he is the greatest sprinter of all time.

“There was no doubt,” Bolt said after winning his fourth 200 world title in a row to add to two Olympic titles. “I told you guys that I would do it.”

He capped his performance with his trademark “Lightning Bolt” pose. After two years of doubt and worries that age had started to affect the bearded champion at 29, he again displayed the wide grin of a teenager.

With the clock reading 19.55 seconds, Bolt set the best time of the season. And despite slowing down, he still beat Gatlin by .19 — much more than the .01-second edge Bolt had in Sunday’s 100 final.

This season was supposed to be Gatlin’s best chance to challenge Bolt and despite the best times of his career at 33, he still came up short when it counted.

“I am the oldest man in the field and still running,” Gatlin said. “Running pretty well.”