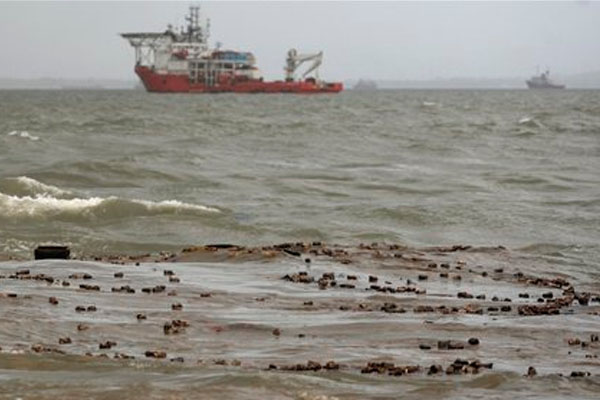 (ZIZ News) — The Guyana-registered vessel, and its crew, which was stuck off the coast of Dieppe Bay for four days, has been given the green light to return home once repair work is completed.

Officers of the St. Kitts-Nevis Defence Force Coast Guard conducted a thorough search of the vessel, MV Hatuna Matata, after it was towed to the St. Kitts Marine Works Boat Yard on Monday.

Public Affairs Officer for the Defence Force, Captain Kayode Sutton, told ZIZ News that nothing illegal was found on the boat.

“When we got to the base in New Guinea, a boarding team comprising of Coast Guard and Customs Officers boarded the vessel to conduct a detailed search,” he said, adding that “(When) the search concluded, nothing suspicious was found and that’s just part of the routine duties of the law enforcement agencies within the Federation to ensure that the vessel is not carrying anything that contravenes the laws of the Federation so they had to ascertain.”

He said weather conditions and the location of the vessel while it was stranded, prevented authorities from conducting a thorough search at the time.

“It was unfortunate that this detailed search could not have been conducted earlier. It wasn’t due to the inefficiencies on our part but it was due to the weather condition and the location of the vessel and we had to observe safety precautions. So we didn’t really press so much to board the vessel to do a detailed search because the vessel was leaning from side to side. Even after we finally succeeded in boarding it, it was leaning from side to side,” he explained.

Captain Sutton disclosed however, that measures were put in place to make sure nothing was placed on the boat or taken off while it was stranded off the coast.

“During the period, eyes on surveillance were maintained on the vessel so nothing could get to the vessel, nothing could leave the vessel okay so everything was contained pretty much. The vessel was contained until it got off the reef where it was where the disaster took place and taken to the St. Kitts Marine Works location in New Guinea where it is safe, the environment would be safe; no safety precautions would be breached and then they did the thorough boarding. So there was no danger, it did not hinder us from performing our duties in any way. I believe that the same goes for the Customs Department, there was no hurry, we didn’t want to compromise safety just to get onboard the vessel to search,” Sutton outlined.