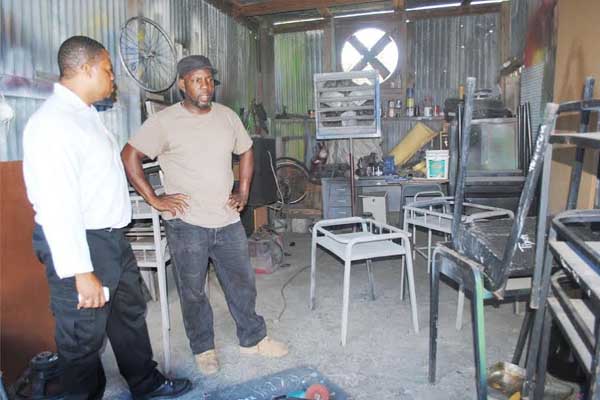 Basseterre, St. Kitts — One man’s thoughtfulness received an impartial hearing when it reached the People Employment Programme’s (PEP) Secretariat at Dorset, and today schools are benefiting from the support he received from PEP.

Mr Jason Nicholls Browne, proprietor of Glossie Auto Body and Restoration Workshop on Westbourne Street in Basseterre, would have seen a lot of old desks in schools being discarded and he felt that the country was wasting a lot of money when new ones are bought, yet the old ones could be refurbished.

“Jason came here and he gave us an idea when he said to us that the hundreds of desks that are thrown away every year or stacked somewhere in a backroom every year, he can refurbish them and put them back in the schools,” recalls Mrs Celia Christopher, PEP’s Training Coordinator.

“We were sold on the idea and so we said to him, well you can start by going to the schools, speaking with the principals and collecting those desks, and so he went to the schools picked up the desks, took them to his workshop and he came back to the PEP to discuss the issue of materials. We started with 135 desks.”

According to PEP’s Senior Field Officer, Mr Jason McKoy, the partnership between Mr Browne and the People Employment Programme has done wonders because old desks that were destined for the dump yard have been turned into items of value that schools now are looking forward to receiving.

“We did a search, we went around the island to see where all of the unused desks lie and we came up at the Cayon High School, some we took,” said Mr McKoy. “Most of the desks came from the Verchild’s High School, which were thrown outside because they were pretty much damaged.”

He along with Mr Browne approached the headmistress of the Verchild’s High School who allowed them to take all of the disused desks which he took to his shop and he refurbished them with the People Employment Programme proving him with all the materials he needed. He did a perfect job just as he had done in the past.

“Since then we have refurbished a number of those desks, and the PEP Project Manager, Mr Geoffrey Hanley, and the Minister responsible for PEP, the Hon Glenn Phillip, who is also the parliamentary representative for the area donated at least 40 desks back to the school and said to us to give the refurbished ones to other government institutions that would need them.”

Others that have benefitted from this PEP-sponsored desk refurbishment programme include the PEP Cosmetology Class at the Newtown Community Centre, who according to Mr McKoy received 14 desks.

“Any desks that are broken down and we go to the schools and they do not want them we take them we give them to the body shop by Jason Browne and he does all the refurbishing and then from there we put them out back into whatever needy school for the government side of it free of cost,” commented Mr McKoy.