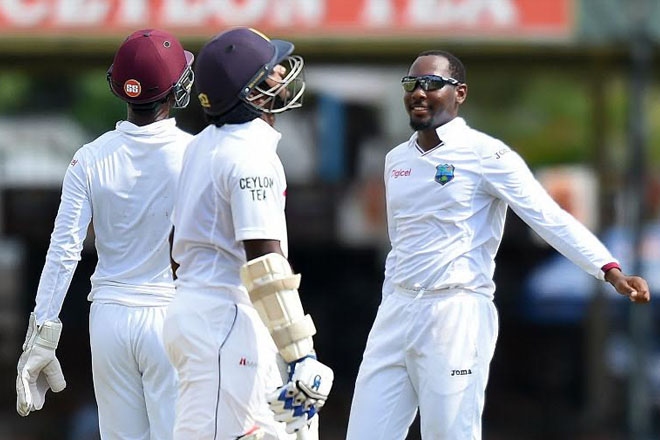 (ZIZ Sports) — There is a sign outside the P Sara Oval which reads: “If your back is against the wall, turn around and write on it.” Jason Holder’s men must have glimpsed it coming into the ground, as they produced a totally inspired performance, with the Sobers/Tissera series on the line.

As the great man Sir Gary Sobers sat and looked on, he must have been pleased at the end of the day, as the West Indies bowlers humbled Sri Lanka for 200. Left with 26 minutes to survive the visitors had one casualty in Shai Hope (4) to close on 17/1.

What was probably even more pleasing for Sir Gary was the fact that a young man on debut for the West Indies bowling left arm spin, like he did, grabbed four wickets.

Jomel Warrican who was born in St. Vincent, lived in Tortola and has now settled in Barbados, where his father is a lecturer at the Cave Hill Campus of the University of the West Indies, looked like he belonged to Test cricket.

He was greeted with a boundary and many of his searching left arm chinaman deliveries were kept out. However, he got his first wicket with a full toss, which was sent back his way and he gleefully accepted it, to open his account.

He never looked back from that point and ended the innings with 4/67 – becoming the fourth West Indies left arm spinner to grab four or more wickets on debut.

Under pressure going into the match the West Indies lost the toss but soon there were ‘high fives’ all about the place as Jerome Taylor had opener Kaushal Silver caught behind before the scorer had used his ink.

This set the tone for the innings and the captain himself got into the act by sending back first Test centurion Dimuth Karunaratne and skipper Angelo Mathews. In between the pacy Roach enjoying the P Sara strip accounted for Kushal Mendis.

The man standing between the West Indies dominance of the home team was Malinda Siriwardana. He batted well in the circumstances and was not afraid to go over the top, which Warrican realised as he clobbered him for two maximums to reach his maiden half century in Tests. He took 118 minutes faced 76 balls and struck five fours and two sixes.

Tea was taken at 145/6 which represented another good two hours work from the West Indies bowlers. The Ceylon Tea at the break would have sharpened the focus of leg-spinner Devendra Bishoo and wicketkeeper Denesh Ramdin, as the two combined to give West Indies their seventh wicket for the addition of just four runs. Dilruwan Perera was stumped as his back leg was just mere millimetres off a blade of grass at the batting crease.

After his fall Warrican accounted for Siriwadana for a well played 68 and the despite a brave unbeaten 26 from Rangana Herath, all Sri Lanka could make was 200.

A Mathews c Brathwaite b Holder*14

K Brathwaite not out*4

D Bishoo not out*5