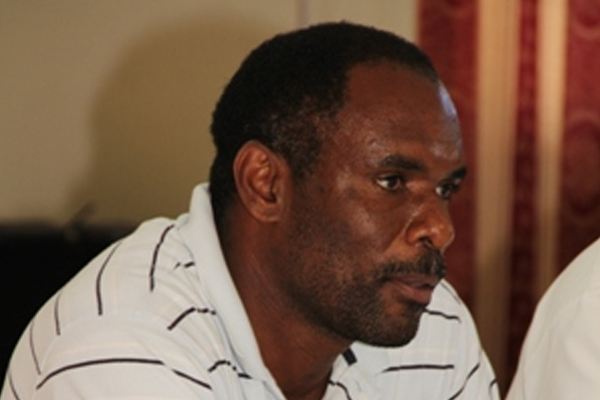 We are damaged but not destroyed- Nevis Treasurer tells staff; Public

NIA CHARLESTOWN NEVIS — “We are damaged but not destroyed.” Those were the words of Treasurer in the Nevis Island Administration Mr. Colin Dore when he spoke to more than 40 staff members combined of the Treasury, Inland Revenue and Value Added Tax (VAT) departments on January 17, 2014, hours after an early morning fire gutted the building which housed those offices.

The workers who had turned up for duties Friday morning were addressed at a meeting with Premier and Minister of Finance Hon. Vance Amory, Permanent Secretary in the Ministry of Finance Mr. Laurie Lawrence and the Treasurer just past midday at the Red Cross Building.

“You need to be confident that we can get through it … Let us use this as an opportunity to show the public that we are damaged but not destroyed.

“We would have lost a lot of our paper documents. Everything which is on paper is basically on an electronic file. We were able to save all of our servers. We are now going through the process of clean up and getting them restarted to see what can be done in terms of retrieving the documents,” he said.

Mr. Dore also gave the staff an insight into the status of the situation with regard to the fire damage.

“We may have lost the paper records. The good thing, so far, we were able to salvage the rack with all the back-up servers just before the fire actually took over that section. So right now the IT Department is going through trying to clean up and we are hoping that we could reconnect later today and once they are back up and running we are half way. We have lost the paper work but the back-up is there. We could start from as late as yesterday, so we are looking forward to that from the Treasury end.

“I am not sure about the Inland Revenue but we [Treasury] also have back up in Canada. I spoke to the guy this morning and that one is fairly up-to-date… VAT, it appears that most things have gone up in smoke. Inland Revenue, on the other hand, when we checked this morning most of the things were still intact. They would have suffered some water damage because of the fire in the roof and therefore, they had to be wetting the roof. We were able to save some documents from the Inland Revenue Department.

“Inland Revenue may not be too bad in terms of document loss but the other two departments [Treasury and VAT] would have suffered damage to paper documents and we are hoping that our electronic files are still good… If the electronic files are good and we find physical location in a couple of days, we could restart almost immediately in let’s say two to five days,” he said.

Mr. Dore also had words of assurance to the public and asked for their tolerance.

“I would like to say to the public we may have been damaged but we are not destroyed and once we can find a physical location in a couple of days with a couple of computers we can be back up serving the public to the fullest.