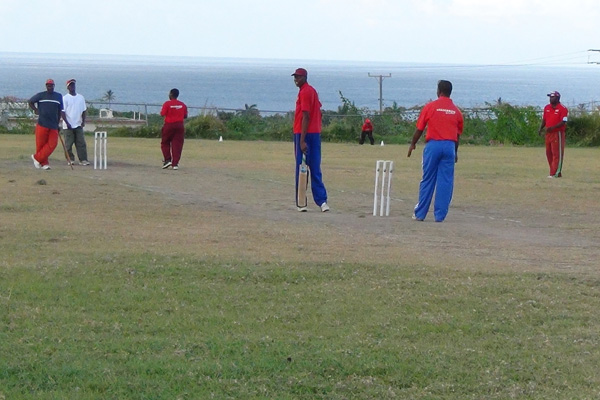 (Sports Page) It seemed like a scene from a movie. It was as unbelievable as it could get but then again, it was a game of CRICKET, the game of ‘Glorious Uncertainties.’

The scene was set at the VOJN playing field. It was Sunday 6th October and the official start of the St. James’ Parish soft ball league, hosted by the Highlights Int sports club.

They were coming up against an imposing Butler’s team which included competent players such as Winston Sutton; Adrian Williams; Bervis Burke and Theron Bussue, among others. It seemed like a foregone conclusion in terms of a winner.

The Butler’s team batted first and Winston Sutton was merciless on the youngsters with a number of huge maximums and Bervis Burke followed suit in the latter overs.

In between however, despite a few dropped catches, the young players showed real potential with their bowling and aspects of their fielding.

One of the seniors in the team, Vellie Maynard, also bowled a superb 2 overs spell in the 10 overs a side affair.

The Butler’s team got to 103 for 2 in their 10 overs. A score that seemed more than enough.

However, Wendell Wallace and his young guards had other ideas. The first ball from Adrian Williams, bowling at full pelt, was slapped audaciously to extra cover by little Jeffers but was magnificently stopped by Dorez Daniel.

However, what Wendell Wallace did from thereon, was astounding. He took charge of the bowling, taking most of the strike and scored mainly in boundaries which included several towering maximums, while shielding the youngsters in the process.

Extras also helped in a big way with the rules of the tournament awarding 4 runs for each wide and each no ball bowled. The Grass Roots team pulled off arguably the most amazing victory in the history of the game!

In the other match played for the afternoon UNSOLVED, the Newcastle based team, defeated Brick Kiln.

A Pemberton and D. Phillip 1 wicket each

Matches will continue on Sunday 13th October at 1 pm at the VOJN ground.