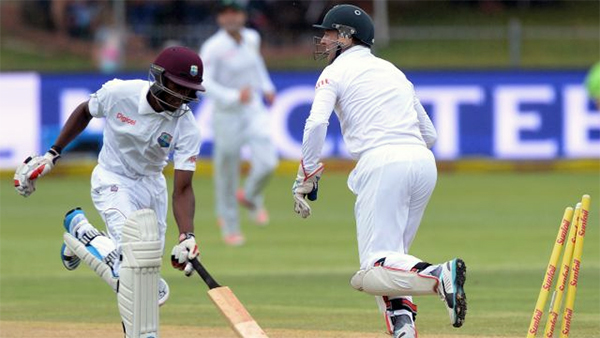 Sports Page — Centuries from Kraigg Brathwaite and Marlon Samuels steered West Indies past the follow-on mark before a familiar collapse revived the possibility, albeit slight, of a South Africa win. Brathwaite and Samuels added 176 for the third wicket before West Indies let slip a position of apparent safety by losing seven wickets for 44 runs. They trailed by 142 with one wicket in hand when rain intervened for the umpteenth time to end play with an hour still left.

After some predominantly short bowling from South Africa’s quicks that discomfited Brathwaite and Samuels without quite threatening to dismiss them, Vernon Philander broke the partnership with a full ball that moved in sharply and rapped Samuels’ front pad, punishing his non-existent front-foot stride.

Paul Reiffel upheld the lbw shout, and Hawkeye showed the ball to be clipping leg stump after Samuels reviewed. Third ball of the next over, Morne Morkel sent back Brathwaite, who went for a drive away from his body at a ball that wasn’t quite full enough for the shot and edged a catch to second slip.

Denesh Ramdin and Shivnarine Chanderpaul saw West Indies through to tea, before Imran Tahir – who had been poor till that point, struggling with his control and conceding 96 in his first 23 overs – dismissed both in the space of three balls with his googly. The first one held its line rather than turning sharply in and pinged Ramdin on the front pad when he pressed forward to drive, and the second rolled back between Chanderpaul’s legs and trickled into his stumps after he had defended it off the back foot.

West Indies, already boasting a none-too-dependable lower order, had gone into the Test match with five bowlers, and South Africa sliced through the tail before the rain returned.